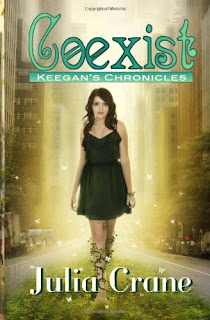 From Goodreads:
Sixteen-year-old Keegan is struggling to keep her huge secret from her friends--she's an elf, descended from a long line of elves that live in secrecy alongside humans. In elfin society, mates are predetermined but not allowed to meet until they are eighteen. Against tradition, Keegan's brother Thaddeus told her Rourk's name because his visions warned him she'd need Rourk's protection, especially since Keegan will play a key role in the coming war between the dark and light elves.

Rourk finds himself drawn to Keegan's side every time she thinks his name. He wants to talk to her but remains in the shadows, silently guarding her every time she mentally beckons him. A twist of fate thrusts the two of them together when Rourk is forced to step up his protection and make his presence known. An ancient prophecy deeply entwines Keegan's family and the future of their society. Somehow they must find a way to thwart fate and win the battle...without losing Keegan. With war brewing, and dark forces aligning, will Keegan and Rourk ever have the life together that they both desire?

My Review:
What a great book! I loved  the elves with their chosen ones, and how romantic that is, besides the fact that they can't meet until they're 18, wouldn't it be better to let them be friends as children, and then as they grow up, and learn how things are, that they are told that they are meant for each other? Though I can see the wait till 18 thing. Though that might cause some trouble, like with Keegan and Rourk, as Rourk is a year older, or Keegan's parents were Richard was way older then Emerald. Yep.

Really enjoyed the book, it was a lot of fun, the characters were so great, strong, funny, and friendly. They were really great people, if maybe once or twice they got in trouble, like going to a fair with I-can't-spell-it-but-it's-like-physic, because they went in the first place, and that she didn't tell her parents about it. Yep. Kinda funny, besides the fact that if it had been someone else, the great war and yeah. Not going to say anything else on that!

I really liked her friends, especially Anna, since she's really special, and I can't wait to know her uniqueness since her mom was a magical being, and her father was human. It'll be interesting to see how that affects Keegan and the rest of them in Conflicted in which Anna is mentioned. Can't wait to read that, and I'll hopefully be reading it for tomorrow!!!

This was an excellent book, with a fantastic ending that just broke my heart, so I hope you guys check it out, and then the rest of the series!

Giveaway:
I'm hosting a giveaway of this book, Coexist. It'll be a ebook copy, and so it'll be International. I'll pick a winner via random.org on January 2nd so you have 4 days for you guys to enter.To Enter:In the comments, tell me something that you think you'd like about this book and your email.For Bonus Entries, 1 each, (and if you've already done them for a previous giveaway, say that) -follow this blog by GFC-follow this blog by email-follow Julia on twitter-follow me on twitter-add this book on Goodreads 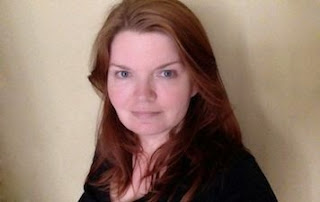 Bio:
Julia Crane dreamt of elves and teen androids long before she captured them and put them on paper. She’s written and released over fifteen young adult and new adult titles over the past two and a half years. From science fiction adventures to succubus, Julia’s fresh voice is easy to read and imaginative. Widely known for her Keegan’s Chronicles and IFICS series, she's hit numerous best selling list on Amazon.

Stops on the Tour:
Click here to see the Keegan's Chronicles Tour Schedule!