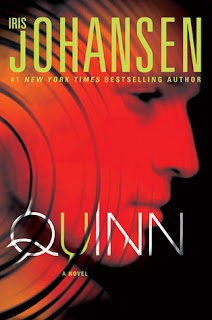 From Goodreads:
As a former Navy SEAL turned cop, Joe Quinn has seen the face of evil and knows just how deadly it can be. When he first met Eve Duncan, he never expected to fall in love with a woman whose life would be defined by her dual desires to bring home her missing daughter and discover the truth behind her disappearance---no matter how devastating. With the help of CIA agent Catherine Ling, they make a shocking discovery that sheds new light on young Bonnie's abduction and puts Quinn squarely in the crosshairs of danger. Eve's first love, John Gallo, a soldier supposedly killed in the line of duty, is very much alive---and very much a threat.

Emotionally charged, with one shock after another, Quinn reveals the electricity of Joe and Eve's first connection, and how they fell in love in the midst of haunting tragedy. As their search takes them deeper and deeper into a web of murder and madness, Joe and Eve must confront their most primal fears . . . and test their resolve to uncover the ultimate bone-chilling truth.
My Review:
Wow, this was such a fantastic novel! Split between telling the story of Quinn and Eve just after Bonnie's disappearance, another past time period in the characters lives that I wanted, this was just a fantastic book! It was great to see John, and Catherine, interact, because they are very similar characters, strong, intelligent, and have survived some pretty tough pasts. Personally, I think that they fit just like Quinn and Eve do, so I hope we see more of them interacting soon!

Lots of interesting developments in this book, and it seems like a lot of the characters who are thought dead, aren't. And the surprises when these characters come back, well, it's very intriguing, to say the least! Especially since these characters are near and dear to the other characters, and in extension, us the readers.

And that ending! I want to know whoever that is, because man, there's a great possibility that it's the guy who killed Bonnie, and we've been wondering who that's been since the very beginning, because it's affected Eve so much! Such a cliffhanger!!

This was a fantastic book, and if you love Eve, Quinn, Bonnie, and the rest of the gang, you'll check out this book! Because it was freaking fantastic! Check it out on Amazon!