Week 52 Review: The Power of Six 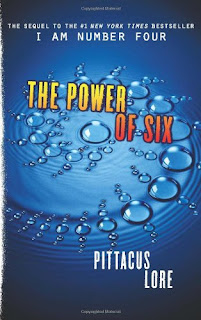 From Goodreads:
I've seen him on the news. Followed the stories about what happened in Ohio. John Smith, out there, on the run. To the world, he's a mystery. But to me . . . he's one of us. Nine of us came here, but sometimes I wonder if time has changed us—if we all still believe in our mission. How can I know? There are six of us left. We're hiding, blending in, avoiding contact with one another . . . but our Legacies are developing, and soon we'll be equipped to fight. Is John Number Four, and is his appearance the sign I've been waiting for? And what about Number Five and Six? Could one of them be the raven-haired girl with the stormy eyes from my dreams? The girl with powers that are beyond anything I could ever imagine? The girl who may be strong enough to bring the six of us together? They caught Number One in Malaysia. Number Two in England. And Number Three in Kenya. They tried to catch Number Four in Ohio—and failed. I am Number Seven. One of six still alive. And I'm ready to fight.

My Review:
Oh, a great second book in a pretty great series! Though I don't really like the infamous story behind the authors, and some people are saying that they wrote this series by formula and to cash in on the Twilight crazy, well, I love almost all books, so of course, I loved this one!

One thing that I felt upset about was Sarah's betrayal. Or seemingly betrayal, because there has to be something more to it, right? Otherwise, that would just be heartbreaking, I mean, I was really rooting for them in I Am Number Four!!

With that, is the square, between John/Four, Sarah, Six, and Sam, because, well, John and Sarah should be together, and Six and Sam should be together, and not with romantic connections between them, because it's an unnecessary complication that added almost unnecessary conflict ie, the fight with Sarah, and the implication that she's the one that turned them into the F.B.I.

I enjoyed the Spain/#7, Marina's side of the story, which was new, and yeah, we got to see another side of their lives, and how it was like, and new characters, new developments, can't be upset with that, because, more world building, and more potential, and actual, fun!!!

Plus it had almost all the great characters from Four, John, Sam, a bit of Sarah, and a lot more of Six, and I can't forget Bernie Kosar!!! Thought there has been some death, there is still plenty of life, and I can't wait to read some more in this series!

I loved and enjoyed this book, can't wait to read more!!