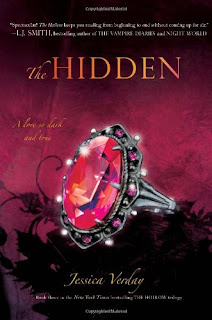 From Goodreads:
A love that knows no bounds. Abbey knows that Caspian is her destiny. Theirs is a bond that transcends even death. But as Abbey finally learns the full truth about the dark fate that links her to Caspian and ties them both to the town of Sleepy Hollow, she suddenly has some very hard choices to make. Caspian may be the love of her life, but is that love worth dying for? Beautifully spun, emotionally gripping, and irresistibly romantic, The Hidden will leave you breathless.

My Review:
What a ending to this series! In a very big way, it was quite sad what with them being dead and all, but that her friend was alive, and happy, and the last year hadn't really happened the way that it had in the first 2 books. Yep. So it was a bit sad that they were dead, but they were together like Nikolas and Katy, who were going to join the Revenants! Which was a bit  bittersweet, they were together, but they weren't just spending their time just with themselves, they were going around, and helping other couples like Abbey and Caspian, which is really good, but still, they don't have any more time to just be together!

Anyway, to get there, there was a visit to an insane people's hospital, and Abbey slowly working her way to the point where she can join Caspian, because she was supposed to a year ago-she was the one who was supposed to die, not Kristen, and she just has a whole ton load of questions, and she starts wondering if she can let go of her life, and her dreams of the perfume shop. Yeah.

Vincent was being a bad guy, Ben was being sweet, and then there were all sorts of problems, and incidents, and then the book came to its end, but the whole the-whole-past-year-or-so-and-events-of-the-last-2-books-being-replace-with-different-events-seeing-that-Abbey-is-dead thing was unexpected. But it worked with the series. And I kinda liked it, but I was still sad. Yep.

This was a great ending to the series, though, I really enjoyed it, and I hope you guys check the series out!!!