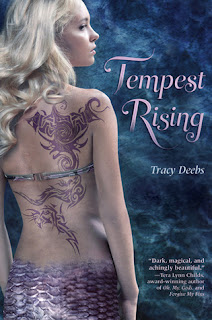 From Goodreads:
Tempest Maguire wants nothing more than to surf the killer waves near her California home; continue her steady relationship with her boyfriend, Mark; and take care of her brothers and surfer dad. But Tempest is half mermaid, and as her seventeenth birthday approaches, she will have to decide whether to remain on land or give herself to the ocean like her mother. The pull of the water becomes as insistent as her attraction to Kona, a gorgeous surfer whose uncanny abilities hint at an otherworldly identity as well. And when Tempest does finally give in to the water's temptation and enters a fantastical underwater world, she finds that a larger destiny awaits her-and that the entire ocean's future hangs in the balance.

My Review:
This was such a great book! I haven't read too many mermaid books, and then this one wasn't really a mermaid book! It had a great unique ideas, with the Selkies, and all that. And then there was all the conflict with her choice, and the mystery behind what's going on, and why she should be scared of the water but at the same time, loves it, and the how and why of Kona. Yep.

I loved all the boiling feelings that Tempest went through, because she does like her boyfriend, Mark, but Kona understands her, and Kai is a mystery for 3/4s of the book, before we finally learn that he's a Selkie, and her mom is pretty important in that world and that there's someone out there that wants her power for herself, and that's the bad guy, and then her mom dies at the bad guy's hand, and yeah, that's sad, but Tempest works through it, and entering the water, I think that's the best thing for her.

I really enjoyed Kai's parents, and the butler, the contrast was really funny, and I really enjoyed that! It was just so awesome, and they were really great, and I could see how Kona could gain his Kona-ness from them!