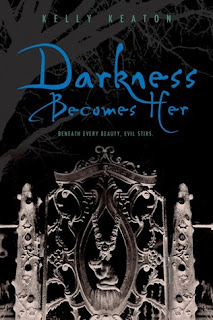 From Goodreads:
A dark and lush paranormal romance set in a richly reimagined New Orleans—now in paperback! Ari can’t help feeling lost and alone. With teal eyes and freakish silver hair that can't be changed or destroyed, Ari has always stood out. And after growing up in foster care, she longs for some understanding of where she came from and who she is.

Her search for answers uncovers a message from her long dead mother: Run. Ari can sense that someone, or something, is getting closer than they should. But it's impossible to protect herself when she doesn't know what she's running from or why she is being pursued.
She knows only one thing: she must return to her birthplace of New 2, the lush rebuilt city of New Orleans. Upon arriving, she discovers that New 2 is very...different. Here, Ari is seemingly normal. But every creature she encounters, no matter how deadly or horrifying, is afraid of her.
Ari won't stop until she knows why. But some truths are too haunting, too terrifying, to ever be revealed.
My Review:
Oh, this was an awesome book! It was really unique, what with New 2, and the vampires and the witches and the other paranormal families, and the whole decedent of Medusa, it's the first book that I've read that has something like this, and the ending? Well, it was really, really good! Can't wait to read A Beautiful Evil!

The romance was a really great, because Sebastian is this guy who is like a mother hen with a fierce protective instinct, and that he's pretty much as unique as she is, and how special, being half vampire, half warlock, and her being one of a kind, since there's the whole "women of her bloodline dying a violent death when they reach a certain age, but only after they've had a baby girl" thing going on. Yeah.

Her friendship with the strange ones, the outcasts in the town of outcasts, almost, was really sweet, since they were all a bit strange, but they were fun to read about! I really enjoyed them!

I knew that the guy that she left in the cell was important, I wish Ari could've known that before she left him, since he wasn't there when they went looking, because of course Athena would move Ari's dad out after Ari broke all the other people-creatures out! But yeah, that was a ARGH!! moment.

The ending was spectacular, and just so good, and I just can't wait to read the next book! So read this one!!! Check it out on Amazon!