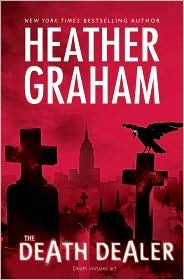 From Goodreads:
Genevieve O'Brien knows all about nightmares. She survived for two months as the prisoner of a deranged killer. Now a new menace is stalking the streets of New York.

The media are buzzing about the Poe Killings, a string of homicides mirroring the author's macabre stories. Almost without exception, the victims have been members of a literary society devoted to the master of crime fi ction--and Genevieve's own mother may be next.

Spooked by the bizarre slayings, Genevieve turns to P.I. Joe Connolly, her rescuer, her friend and...? She wants him to be much more, but he's been avoiding her since her ordeal, and she can't seem to get close to him.

Joe isn't sure there even is a case. But as the body count rises and their investigation leads them miles from Manhattan, he has to admit that there's a twisted new serial killer at work.

Even more unsettling is the guidance Joe is receiving from beyond the grave. People he knows to be dead--his cousin Matt and Matt's fiancee, Leslie--are appearing to him, offering new clues and leads, and warning him of terrible danger ahead.

But not even otherworldly intervention can keep Genevieve and Joe's new nightmare from becoming terrifyingly real--and putting them squarely in the crosshairs between this world and the next.

My Review:
I enjoyed this book so much, it was a great mystery novel, romance novel, and paramormal book! Which is something I'm really starting to expect in Heather Graham books, because she's so good at combining them!

So when I was doing a bit of research to write this review, I found out that another book, Dead Room, was a prequel to this book, it made sense, since there were references to another case, which usually means another book in a series, and since it was just a random opportunity toread this book, I have't read all the previous books in the series, which I will hopefully remedy soon!

I enjoyed the twists in the ase as the book went on, the things we learned about the characters, that when the ending came, I was sad to say goodbye, but if we don't say goodbye to characters, they don't get any peace, and we don't want that!

I enjoyed this book, and I really need to read the other books in the series!