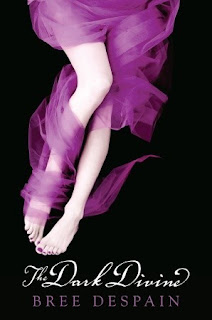 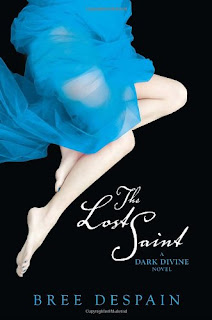 From Goodreads:
Grace Divine, daughter of the local pastor, always knew something terrible happened the night Daniel Kalbi disappeared--the night she found her brother Jude collapsed on the porch, covered in his own blood--but she has no idea what a truly monstrous secret that night held.The memories her family has tried to bury resurface when Daniel returns, three years later, and enrolls in Grace and Jude's high school. Despite promising Jude she'll stay away, Grace cannot deny her attraction to Daniel's shocking artistic abilities, his way of getting her to look at the world from new angles, and the strange, hungry glint in his eyes.The closer Grace gets to Daniel, the more she jeopardizes her life, as her actions stir resentment in Jude and drive him to embrace the ancient evil Daniel unleashed that horrific night. Grace must discover the truth behind the boy's dark secret...and the cure that can save the ones she loves. But she may have to lay down the ultimate sacrifice to do it--her soul.

From Goodreads:
A family destroyed. A love threatened. An enemy returns. Grace Divine made the ultimate sacrifice to cure Daniel Kalbi. She was infected with the werewolf curse while trying to save him, and lost her beloved brother in the process. Desperate to find Jude, Grace befriends Talbot, a newcomer to town. But as the two grow closer, Grace's relationship with Daniel is put in danger - in more ways than one. Unaware of the dark path she is walking, Grace begins to give into the wolf inside of her - not realizing that an enemy has returned and a deadly trap is about to be sprung.


My Review:
Loved these books! They were really great, and they just were a different take on werewolves, and the how and whys of them. Really interesting, and then the romance to add to that, well, lets just say that I liked it, and leave it at that?

There's a lot of change in these novels, and I really love how the bad guy in the first one is exposed, and who it was, because it was really hard to see it coming, and in the second one, well, just as good! Really added to the book!

Though I wish that things ended up a bit differently, the characters were a bit scarred from what happened, and that really wasn't their faults, they weren't really in control of themselves. But oh, well, Things happened, and they needed to happen for these to be the great stories that they were!

Loved these books, so I hope you guys check them out!