Week 49 Review: In the After 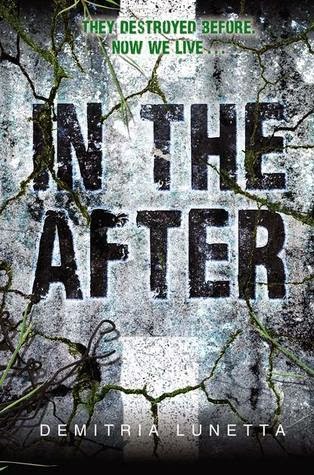 From Goodreads:
They hear the most silent of footsteps.
They are faster than anything you've ever seen.
And They won't stop chasing you...until you are dead.

Amy is watching TV when it happens, when the world is attacked by Them. These vile creatures are rapidly devouring mankind. Most of the population is overtaken, but Amy manages to escape—and even rescue “Baby,” a toddler left behind in the chaos. Marooned in Amy’s house, the girls do everything they can to survive—and avoid Them at all costs.

After years of hiding, they are miraculously rescued and taken to New Hope, a colony of survivors living in a former government research compound. While at first the colony seems like a dream with plenty of food, safety, and shelter, New Hope slowly reveals that it is far from ideal. And Amy soon realizes that unless things change, she’ll lose Baby—and much more.

My Review:
This book was really creepy and freaky! The Them were just so spine chilling, that it's almost hard to believe that while they are the monsters in the book, they aren't the bad guys that the good guys have to face!

This book started right off in the action, which was just pulse pounding, that terror that you might not live another day, another hour, and while that tapered off a bit, it was almost always a constant threat, over your shoulder, because They could be there. It was so creepy! I loved it!

I've heard people compare this to The 5th Wave, and if you liked one, you might not like the other, and while I've only read this one so far, I think I'd enjoy both of them! Because I just love books so freaking much! I can never have enough!

Between Them, and New Hope, well, humanity in general, and Amy and Baby in particular, are in trouble! Because just because the world is ending, doesn't mean people will be good, however much we could hope for that! And yeah, it just was good for the book, if not so good for the characters!

I really enjoyed this book a lot, and yeah, I can't wait to read more!