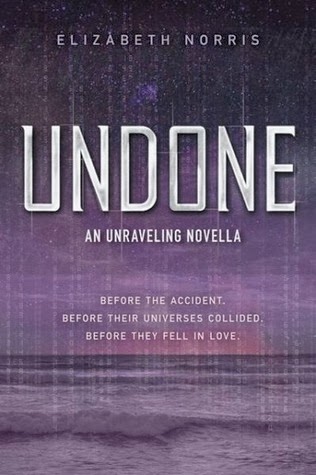 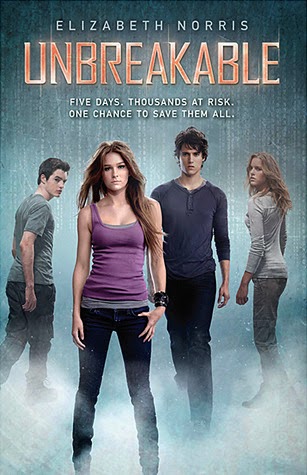 From Goodreads:
Before the accident. Before their universes collided. Before they fell in love.

Riveting and romantic, Undone: An Unraveling Novella contains three short stories set in the world of Unraveling, the first book in the gripping sci-fi duology by Elizabeth Norris.

Before Ben Michaels saved Janelle Tenner's life, Janelle saved Ben when he stumbled through an interuniverse portal into a completely new world. That day, he fell in love with the girl of his dreams. And he never forgot her.


Through three stories told from Ben's point of view, learn how Ben and his friends discovered their ability to travel between worlds, how Ben first met Janelle, and how he pined for her for years before he actually got the chance to meet her, save her life, and capture her heart. And find out what happens to Ben between the cliff-hanger conclusion to Unraveling and the beginning of its heart-stopping sequel, Unbreakable.

From Goodreads:
Four months after Ben disappeared through the portal to his home universe, Janelle believes she'll never see him again. Her world is still devastated, but life is finally starting to resume some kind of normalcy. Until Interverse Agent Taylor Barclay shows up. Somebody from an alternate universe is running a human trafficking ring, kidnapping people and selling them on different Earths—and Ben is the prime suspect. Now his family has been imprisoned and will be executed if Ben doesn't turn himself over within five days.

And when Janelle learns that someone she cares about—someone from her own world—has become one of the missing, she knows that she has to help Barclay, regardless of the danger. Now Janelle has five days to track down the real culprit. Five days to locate the missing people before they're lost forever. Five days to reunite with the boy who stole her heart. But as the clues begin to add up, Janelle realizes that she's in way over her head—and that she may not have known Ben as well as she thought. Can she uncover the truth before everyone she cares about is killed?

My Review:
Oh, wow, did I really enjoy these books! I mean, we get to see things from Ben's POV, and how he first noticed her, and yeah, then there was Unbreakable, which was extremely dark, because dealing with the whole, world almost ended, thing.

I really enjoyed being in Ben's POV, because he is learning about travelling between the universes, but he doesn't have that mystery about it, that Janelle had in Unravelling. So yeah, there was that, and then we got the story that was between the full length books, and oh, loved it so much!

Unbreakable was a heart breaker. I mean, they're in love, from different universes so they can't be together, and yeah, now he's being accused of being a human trafficker, I think that's #4 worst crimes that isn't a genocide, because that's just a whole other level of evil (murder, child abuse, and rape are the first 3) and how she has to work to find the actual guilty party, yeah, that's not a great situation to be in!

I loved the science fiction elements in this book, as well as the mystery ones, there were a ton of red herrings, and then subtle clues that are the opposite of red herrings, that led to the conclusion, and yeah, I'd love to know how they numbered the universes!

These were spectacular books, I really enjoyed this duology, and I'll have to check out what Elizabeth Norris writes next!