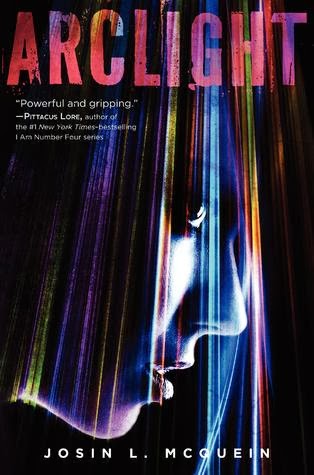 From Goodreads:
No one crosses the wall of light . . . except for one girl who doesn’t remember who she is, where she came from, or how she survived. A harrowing, powerful debut thriller about finding yourself and protecting your future—no matter how short and uncertain it may be.

The Arclight is the last defense. The Fade can’t get in. Outside the Arclight’s border of high-powered beams is the Dark. And between the Light and the Dark is the Grey, a narrow, barren no-man’s-land. That’s where the rescue team finds Marina, a lone teenage girl with no memory of the horrors she faced or the family she lost. Marina is the only person who has ever survived an encounter with the Fade. She’s the first hope humanity has had in generations, but she could also be the catalyst for their final destruction. Because the Fade will stop at nothing to get her back. Marina knows it. Tobin, who’s determined to take his revenge on the Fade, knows it. Anne-Marie, who just wishes it were all over, knows it.

When one of the Fade infiltrates the Arclight and Marina recognizes it, she will begin to unlock secrets she didn't even know she had. Who will Marina become? Who can she never be again?

My Review:
This book is one of my most favourites that I've read this year (and that's saying something, seeing as it's the 2nd last week of the year in the way that I do reviews! It was that fantastic, enticing, engaging, all-encompassing books that you can't turn the pages fast enough, can't learn more about the characters, can't have the action unfold quick enough! Yeah.

So things start off pretty quickly right off the bat, the Fade are attacking-and they seem to want to get to Marina. Mariana who just joined them, who doesn't have any memories before she got there. So there's the mystery of what happened there.

Then there was the love triangle that slowly popped up, especially after the big twist, between Tobin, who's dad was lost getting Mariana, and Rue, the Fade that just won't leave her alone. And yeah, I really enjoyed both characters, especially Rue and how his communication with Mariana improved, at the beginning, it was not at all easy!

That Mariana was born Fade? And that the runners of the show of the Arclight, stripped that away to make her human? That was painful to read. Because she had a whole life, and she lost it. Which is not fun, at all! And we get a few of the reasons why-like Honoria, has been infected since the Fade first started out. Yeah.

I really loved this book, it was so fantastic, and yeah, I can't wait to read more of this wonderful, amazing world!