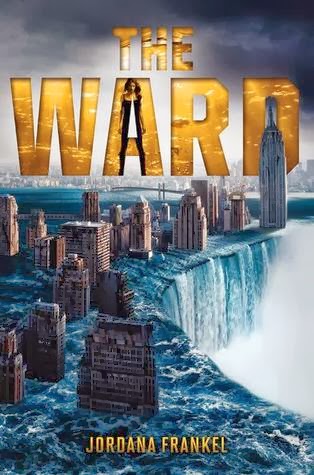 From Goodreads:
Sixteen-year-old Ren is a daredevil mobile racer who will risk everything to survive in the Ward, what remains of a water-logged Manhattan. To save her sister, who is suffering from a deadly illness thought to be caused by years of pollution, Ren accepts a secret mission from the government: to search for a freshwater source in the Ward, with the hope of it leading to a cure.

However, she never expects that her search will lead to dangerous encounters with a passionate young scientist; a web of deceit and lies; and an earth-shattering mystery that’s lurking deep beneath the water’s rippling surface.

My Review:
I thoroughly enjoyed this book! It was entertaining, action packed, and I never questioned a decision that Ren made. I questioned the options that she got sometimes, but not the final decision that she came to, because she always picked the right thing for her!

This world would not be a fun world to live in. Things have pretty much gone to crap, and society has slide back into less democratic governments, attitudes about what women can and and can't do lean more towards can't if it's not taking care of the household, and then here's Ren, who's a female mobile racer in a men dominated sport. Not fun!

Oh, and then there's the HBNC virus, which her sister (which is what she calls her closest friend, seeing as she doesn't have any family living anymore) and so Ren is taking care of her, and that's why she accepts the mission-but there's a ton of hidden agendas, secrets, and lies there. and dealing with that caused like, half the problems that she faced!

And then there's the one thing that's basically over everyone's head-the water. It's why what was Manhattan is now the Ward, it caused/causes the HBNC virus, maybe, and like the synopsis says, there's secrets in it. And yeah, unveiling those secrets was pretty explosive!

Really enjoyed this book, and I can't wait for the next book (though I think there's going to be a wait, #2 doesn't have a title, or a release date, the only info it has, is that it's going to be published by Katherine Tegan Books!) because I want to know what happens next!