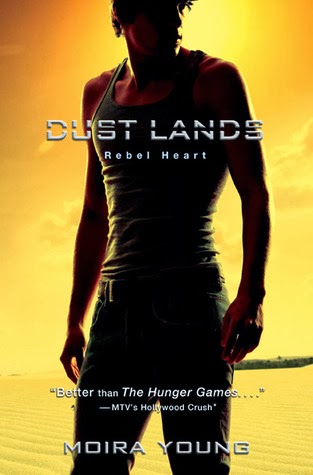 From Goodreads:
Saba thought her world would return to normal after they defeated the Tonton and rescued her kidnapped brother Lugh. The family head west for a better life and a longed-for reunion with Jack. But a formidable enemy is on the rise. What is the truth about Jack? And how far will Saba go to get what she wants?

My Review:
I took a while to getting around to reading this book. I don't know why-well, I do, it's because there's so many fantastic books out there to read-because I really enjoyed Blood Red Road. So yeah, I got to this book, and it was just so freaking good! I utterly enjoyed it, and now I really want that 3rd book now!

Things have changed, and things are growing, since that final battle, and yeah, they find that just because Tonton is gone, doesn't mean that he can't be replaced by a bigger, and badder, threat, which is just what happens, and what do you expect? The book would be boring if there wasn't any conflict, and in this genre, in this series, a major source of conflict is fighting the bad guy(s)!

I loved everything that we learned in this book, because even as some of it was breaking my heart, some of it was very useful in their quest to find something better, or at least, a step in the right direction. One thing that I didn't really like, was that Jack was hardly in this book. But oh, well.

I really enjoyed the fact that hey, these are real people, they can make bad decisions, like Jack becoming a Tonton, or Saba sleeping with DeMalo, that was another thing that I didn't like to much, but I might give him a chance to beat out Jack. A chance. A small one.

All in all, I really want Raging Star, now, because I want to know how this is all going to end!