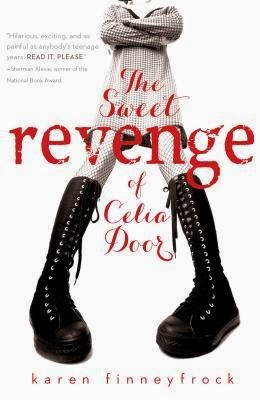 Celia Door enters her freshman year of high school with giant boots, dark eyeliner, and a thirst for revenge against Sandy Firestone, the girl who did something unspeakable to Celia last year.

But then Celia meets Drake, the cool new kid from New York City who entrusts her with his deepest, darkest secret. When Celia's quest for justice threatens her relationship with Drake, she's forced to decide which is sweeter: revenge or friendship.

My Review:
Celia has, until around last year, had a good life. But then things got harder, and there was the incident with Sandy. And yeah, that changes Celia from a normal girl, to a girl who goes to extreme-goes Dark. This was a contemporary, with the mystery of what happened to Celia last year.

Since Celia is a freshman in this book, that means that the incident happen in the last year of junior high. And can I say, that I prefer the way schools are set up here? Well, not in Calgary, but for me, my school district, with kindergarten to grade 4 in elementary, 5 to 8 in middle school, then 9 to 12 in high school? Because middle school is easier and less confusing then junior high, plus with 4 grades per school, more even (kindergarten doesn't count!)

Any ways, I loved how Drake interrupts her revenge plans, because while she deserves to have her revenge, she also deserves her own life, and have other things occupying her time, and not ruin herself getting the revenge, going down a, well, dark path.

When we find out what the incident was, yeah, it was pretty sad. Because no girl should have to go through that alone, and add to the fact that her parents divorced and her dad moved far away, and so her mom works longer hours, she doesn't spend a lot of time with Celia, yeah, not the best of situations.

Celia was a wonderful, great book, and I know I enjoyed it!