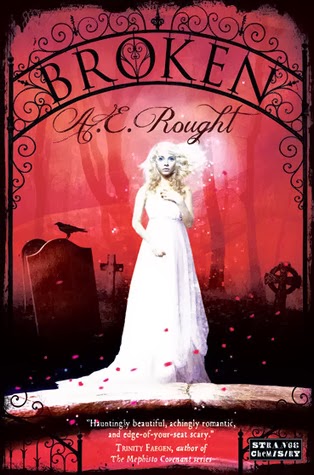 From Goodreads:
Imagine a modern spin on Mary Shelley’s Frankenstein where a young couple’s undying love and the grief of a father pushed beyond sanity could spell the destruction of them all.

A string of suspicious deaths near a small Michigan town ends with a fall that claims the life of Emma Gentry's boyfriend, Daniel. Emma is broken, a hollow shell mechanically moving through her days. She and Daniel had been made for each other, complete only when they were together. Now she restlessly wanders the town in the late Fall gloom, haunting the cemetery and its white-marbled tombs, feeling Daniel everywhere, his spectre in the moonlight and the fog.

When she encounters newcomer Alex Franks, only son of a renowned widowed surgeon, she's intrigued despite herself. He's an enigma, melting into shadows, preferring to keep to himself. But he is as drawn to her as she is to him. He is strangely... familiar. From the way he knows how to open her locker when it sticks, to the nickname she shared only with Daniel, even his hazel eyes with brown flecks are just like Daniel's.

The closer they become, though, the more something inside her screams there's something very wrong with Alex Franks. And when Emma stumbles across a grotesque and terrifying menagerie of mangled but living animals within the walls of the Franks' estate, creatures she surely knows must have died from their injuries, she knows.

My Review:
This book was really, seriously, creepy! Between her dead boyfriend and hanging out at cemeteries, to putting a dead animal in his trunk, and the oddities around that, and then what she discovers at his house, with the clues that only said dead boyfriend did, leads to one conclusion. A modern day Frankenstein monster!

Emma was a bit over the top in her emotions, that things were either sad sad sad, or happy. There really wasn't a middle ground, it was either or, and while that was a bit exhausting to read, it was certainly entertaining, if a bit annoying.

Which applied to the love story, because I mean, emotions, over the top, that's what's in relationships from a good deal of the books I've read, and she was either glad to see Alex, or just couldn't stand to be in the same room with him (though that was a very brief time, and it was more afraid of what it meant, the truth of his existence.)

Which was a mystery in and of itself, finding out that he was resurrected, and that he has parts of Daniel, which is totally freaky. And yeah, the confrontation with his dad, that was almost sad, that it happened, because who would want to face that?

While I did have a few problems with this book, I really enjoyed it, and I'll be checking out the next book in the series!