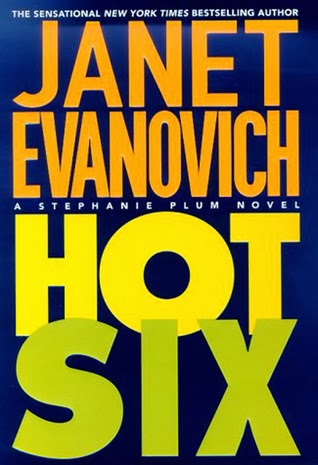 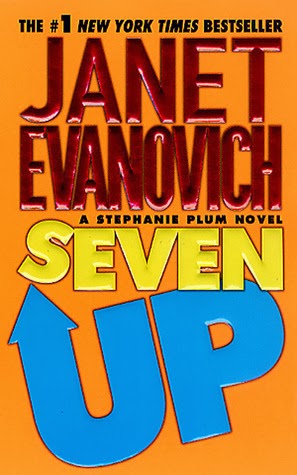 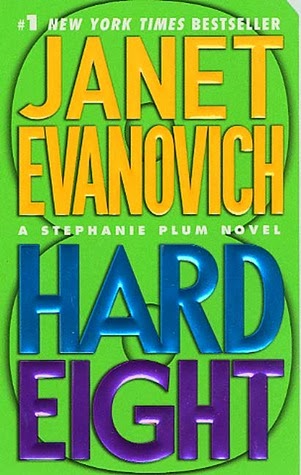 From Goodreads:
Low-rent bounty hunter Stephanie Plum reaches depths of personal experience that other women detectives never quite do. In Hot Six, for example, a sequence of new and hideous cars bite the dust; she finds herself lumbered with a policeman's multiply incontinent dog; and she has several bad skin days. All this when she is trying to prove her distinctly more competent colleague and occasional boyfriend Ranger innocent of a mob hit; avoid the heavies trailing her in the hope of finding him; and cope with a wife-abusing bail defaulter with nasty habits, such as setting Stephanie on fire. The peculiar joy of this series is the comic sense of place; Plum's New Jersey is one where everyone you meet, even the most dangerous of criminals, was at school with you, or stole your mother's first boyfriend, or gave your great-aunt a middling good recipe for meatloaf. Evanovich has built up an attractive cast of comic characters with Stephanie's extended family and those of her two boyfriends, the dashing and sinister Ranger and Joe Morelli (the cop whose family are only too keen on his marrying Stephanie).

From Goodreads:
BLOWN UP

All New Jersey bounty hunter Stephanie Plum has to do is bring in semi-retired bail jumper Eddie DeChooch. For an old man he's still got a knack for slipping out of sight--and raising hell. How else can Stephanie explain the bullet-riddled corpse in Eddie's garden? Who else would have a clue as to why two of Stephanie's friends suddenly vanished? For answers Stephanie has the devil to pay: her mentor, Ranger. The deal? He'll give Stephanie all the help she needs--if she gives him everything he wants...


As if things weren't complicated enough, Stephanie's just discovered her Grandma Mazur's own unmentionable alliance with Eddie. Add a series of unnerving break-ins, not to mention the bombshell revelation leveled by Stephanie's estranged sister, and Stephanie's ready for some good news. Unfortunately, a marriage proposal from Joe Morelli, the love of her life, isn't quite cutting it. And now--murder, a randy paramour, a wily mobster, death threats, extortion, and a triple kidnapping aside--Stephanie's really got the urge to run for her life...

From Goodreads:
Fugitive Apprehension Agent Stephanie Plum has a big problem on her hands: Seven-year-old Annie Soder and her mother, Evelyn, have disappeared.

Evelyn's estranged husband, Steven, a shady owner of a seedy bar, is not at all happy. During the divorce proceedings, he and Evelyn signed a child custody bond, and Steven is demanding the money guaranteed by the bond to find Annie. The money was secured by a mortgage on Evelyn's grandmother's house, and the True Blue Bonds Bail Agency wants to take possession of the house.

Finding a kidnapped child is not an assignment for a bounty hunter. But Evelyn's grandmother lives next door to Stephanie's parents, and Stephanie's mother and grandmother are not about to see their neighbor lose her house because of abduction.

Even though Stephanie's plate is full with miscreants who missed their court dates, including old nemesis and violent drunk Andy Bender and an elusive little old lady accused of grand theft auto, she can't disappoint Grandma Mazur! So she follows the trail left by Annie and Evelyn-- and finds a lot more than she bargained for. Steven is somehow linked with a very scary Eddie Abruzzi. Trenton cop and on-again, off-again fiance Joe Morelli and Stephanie's mentor and tormentor, Ranger, warn Stephanie about Abruzzi, but it's Abruzzi's eyes and mannerisms that frighten Stephanie the most. Stephanie needs Ranger's savvy and expertise, and she's willing to accept his help to find Annie even though it might mean becoming too involved with Ranger.

Stephanie, Ranger, Lula (who's not going to miss riding with Ranger), and Evelyn's lawyer/laundromat manager set out to find Annie. The search turns out to be a race among Stephanie's posse, the True Blue Bonds' agent, a Rangerette known as Jeanne Ellen Burrows, and the Abruzzi crew. Not to mention the fact that there's a killer rabbit on the loose!

Strap on your helmet and get ready for the ride of your life. Hard Eight. The world of Plum has never been wilder.

My Review:
Ah, the pleasures of reading a Stephanie Plum book, then multiply by 3! It was just so awesome, and great, to just read these back to back, as things change, between her, Morelli, and Ranger, and her feelings for them, and the changes in her relationships with them!

Ah, the destruction of Stephanie's cars! So many of them bite the dust, and some of them in some pretty interesting ways! And a bit hilarious, sometimes, because hey, she just goes through so many of them!

I really enjoyed her relationships with Ranger which starts off pretty great, but then downgrades a bit, while the opposite happens with Morelli. Well, currently over the course of these books, I know there's a ton more in the series, so it's probably going to change again sooner or later!

Yeah, there were pretty awesome mysteries, interesting, complicated, and sometimes just plain funny, and others just scary, that I just really enjoyed reading about, having Stephanie solve them with the help of friends!

Really enjoyed these books, and yeah, I can't wait to read more!