Week 51 Reviews: Exit Strategy, Made to Be Broken, Wild Justice 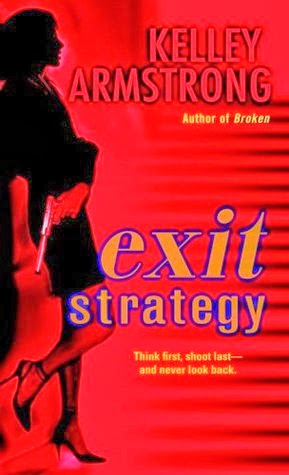 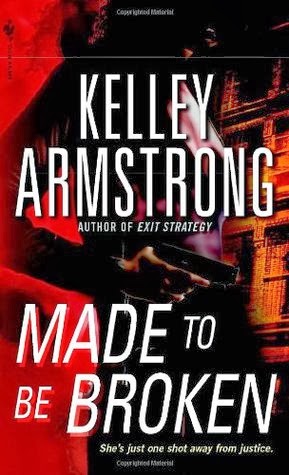 From Goodreads:
Regulars at Nadia's nature lodge don't ask what she does in the off-season. And that's a good thing. If she told them, she'd have to kill them. She's a hit woman for a Mafia family.

Tough and self-sufficient, Nadia doesn't owe anyone any explanations. But that doesn't mean she always works alone. One of her contacts has recruited her in the hunt for a ruthlessly efficient serial killer cutting a swath of terror across the country. The assassin is far too skilled to be an amateur—and the precision of the killings is bringing the Feds much too close to the hit man community for comfort.

To put an end to the murders, Nadia will have to turn herself from predator to prey as she employs every trick she knows to find the killer. Before the killer finds her…

From Goodreads:
The author of the acclaimed Women of the Otherworld series returns with her latest novel featuring an exciting heroine with a lethal hidden talent. This time she's hot on the trail of a young woman no one else cares about and a killer who's bound to strike again. Nadia Stafford isn't your typical nature lodge owner. An ex-cop with a legal code all her own, she's known only as Dee to her current employer: a New York crime family that pays her handsomely to bump off traitors. But when Nadia discovers that a troubled teenage employee and her baby have vanished in the Canadian woods, the memory of a past loss comes back with a vengeance and her old instincts go into overdrive. With her enigmatic mentor, Jack, covering her back, Nadia unearths sinister clues that point to an increasingly darker and deadlier mystery. Now, with her obsession over the case deepening, the only way Nadia can right the wrongs of the present is to face her own painful ghosts and either bury them for good, or die trying. Because in her book everyone deserves a chance. And everyone deserves justice.

From Goodreads:
Protect the innocent. If there is any one principle that drives hit man Nadia Stafford, it’s this. In her own mind, when she was thirteen, she failed to protect her older cousin Amy from being murdered. Now she fails again, disastrously, when she botches a hit. To help her find her equilibrium, her mentor, Jack, brings her a gift: the location and new identity of the predator who killed her cousin and disappeared after the case against him failed.

Vengeance, justice? With the predator in her sights, nothing seems more right, more straightforward, more easy. But finding justice is never as simple as it seems.

My Review:
These were fantastic books! And just looking back, well, I'm writing this review almost a year later, and yeah, I remember, I kept rereading some scenes from Wild Justice, at the pool, because I was on vacation, and this was about 2 weeks later. So yeah, this series sucked me in!

I'd already read both Exit Strategy, and Made to be Broken before. But that was at least 2 years ago, and yeah, I had forgotten what had gone one, basically, besides that it was about an assassin. Yeah. But between my rereading kick, and the recent release of Wild Justice, that got me to reading these 3 books

So reading them again, Exit Strategy with the small scenes from the bad guy's POV, that was awesome, and how he had a victim, a potential one, at least, and decided to let him go, that was pretty good, I didn't want that guy to die!

I loved reading about her and Jack's relationship progress, and regress, again and again, until they confront that pattern in Wild Justice, and yeah, that lead to several scenes that I just read over and over, like the time that Evelyn tricked Nadia into telling her about the recent developments in their relationship by saying that she already knew about them. Just so funny! Another, in Exit Strategy, was when she comes down, and they're talking, and she notices that the age lines-they aren't make up, but that he is actually older then her! That awkward moment was awesome! Just loved it!

So the first mystery isn't really personal. It's a case that is a lot of money, which it turns out that Jack is supplying, about another assassin, who's retiring, and making his exit strategy. The second is more personal, an employee and her baby, and yeah, that was a great thing for Nadia to take down!

And the final mystery-her cousin Amy's, death-and yeah, we learn a lot of details in that-like that Nadia was a victim in that, too, not just Amy. And how Jack tracks the guy down as a gift for Nadia-but then he's killed before they can do anything. And yeah, they dig deeper and deeper, and as they do, so does their relationship. And yeah, that was awesome!

Like how she was afraid to ask for details, so that she wouldn't push him away, he wouldn't walk away, because she thought that he was a private person, and while yeah, while he is, he was afraid that she didn't care about the details.

Yeah, this was a fantastic trilogy, and I've read some murmuring about a post Wild Justice novella, which I wouldn't mind, and yeah, just absolutely loved this series!

Made to Be Broken: