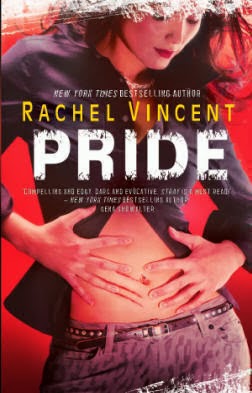 From Goodreads:
I'm on trial for my life. Falsely accused of infecting my human ex-boyfriend--and killing him to cover up the crime. Infecting a human is one of three capital offenses recognized by the Pride--along with murder and disclosure of our existence to a human. I'm two for three. A goner.

Now we've discovered a rogue stray terrorizing the mountainside, hunting a wild teenage tabbycat. It's up to us to find and stop him before a human discovers us. With my lover Marc's help, I think I can protect the vulnerable girl from both the ambitious rogue and the scheming of the territorial council.

If I survive my own trial...

My first review of Pride
My Review:
Such a wonderful book, and it kinda actually hurt, reading it, what with everything that was going on, and what I know is to come, this is just a precursor, no matter how hard it was on Faythe. Because a lot more things are coming, and they're a lot worse!

Really enjoyed being in this world again, of the shifters, and their laws, and how their world is protective of female shifters, to the point where it's like, unwrap me from the bubble wrap, and from the really, really old fashioned ideals!

Add in that, the first known bitten female shifter. Which is something that just totally changes their world, that they've never known it to happen before, and it's only because she had a stray in the family tree on both sides of her family.

The trial, parts of it were fair, I'd admit. But most of it, wasn't. I mean, the one guy is gunning for her, trying to get rid of her, and yeah, that's not fun, at all, and the leader of the judges was really old, and really set in his ways-though he did have his firm idea of right and wrong!

Really enjoyed this book so much, can't wait to reread more!