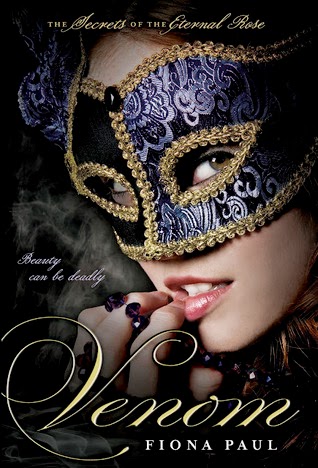 From Goodreads:
Cassandra Caravello is one of Renaissance Venice’s lucky elite: with elegant gowns, sparkling jewels, her own lady’s maid, and a wealthy fiancé, she has everything a girl could desire. Yet ever since her parents’ death, Cassandra has felt trapped, alone in a city of water, where the dark and labyrinthine canals whisper of escape.

When Cass stumbles upon a murdered woman—practically in her own backyard—she’s drawn into a dangerous world of courtesans, killers, and secret societies. Soon, she finds herself falling for Falco, a mysterious artist with a mischievous grin... and a spectacular skill for trouble. Can Cassandra find the murderer, before he finds her? And will she stay true to her fiancé, or succumb to her uncontrollable feelings for Falco?

Beauty, love, romance, and mystery weave together in a stunning novel that’s as seductive and surprising as the city of Venice itself.

My Review:
One word to describe this book? Oh, that's easy! Venom, the title, encompasses it all quite nicely, from the politics that are in abundance, and the backstabbing that goes along with that. The choice between a promise made, and what the heart wants. After all, the 2 main definition of venom are poison in reptiles (which humans can use!) and "extreme malice and bitterness shown in someone's attitudes, speech, or actions." And even the good things, like her thing with Falco, is touched with that.

Not to say that this book is just all that, it has more, but venom is the common denominator in everything, to the point where well, their relationship almost didn't work for me, because Cass just doesn't stand up for herself against him, and the language used suggested things that weren't true.

The murder, when I was reading it, was just absolutely brilliant. But I fear my thoughts have been swept toward some less flattering opinions afterwards, thinking about it, and reading some other reviews, that picked up things and interrupted them faster than I did. Which sucks. Because I did enjoy the mystery when I was reading it, the only bad thought about it originally was that it wasn't original.

This is the first book of the series, and yeah, it opens things up quite nicely, there's a lot of threads that can be continued on in the next 2 books, and yeah, in the end, there's the decision that she makes which pretty much goes against the grain of what happened in the book, which was one of the best things in the book!

If you like historical YA's, you should check out this book, it's entertaining at the very least!