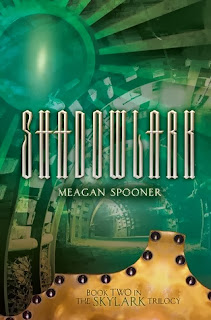 From Goodreads:
Ever since she escaped the city within the Wall, Lark Ainsley's wanted one thing: to find her brother Basil. She's always believed he would be the one to put an end to the constant fear and flight. And now, hidden underground in the chaotically magical city of Lethe, Lark feels closer to him than ever.

But Lethe is a city cowering in fear of its founder, the mysterious Prometheus, and of his private police force. To get the truth about what happened to Basil, Lark has no choice but to face Prometheus.

Facing her fears has become second nature to Lark. Facing the truth is another matter.

My Review:
I loved being in this world again! It's dark, and has that touch of magic, and yeah, we get to be with Lark again, and yeah, that was just so entertaining, because of everything that's she's been through, and now all that she has to go through!

Lark's come a long way from the girl that we knew at the start of Skylark. Like is says in the synopsis, she's been facing her fears a lot, and that make a person either strong, or crazy, and Lark, well, she's strong, and this made her stronger. But she still  has more distance to go on her journey!

I really enjoyed Lark and Oren together, because sparks just fly, not to mention, they're similar in a lot of ways, they've had a lot of darkness in their lives, been forced to do some pretty bad things, and yeah, they both have their powers, and what they do/did with them, that guilt is a part of their relationship, dealing with it all.

The twist of who Prometheus is? Well, considering it's a fiction book, that it turns out to be Basil? Not as big a twist as I would've liked, but yeah, it's very entertaining, because hey, she's been searching for him for a while, and then it turns out that he's been ruling this city, and not always nicely? Sibling conflict, straight ahead!

I really enjoyed this book, it was really fantastic, and I can't wait to read more!