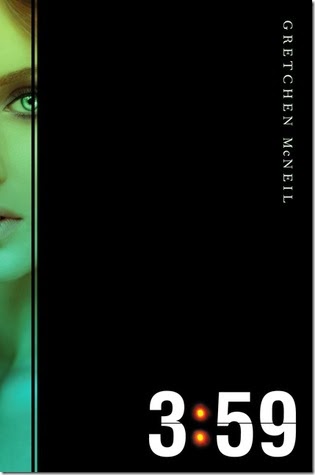 From Goodreads:
Josie Byrne's life is spiraling out of control. Her parents are divorcing, her boyfriend Nick has grown distant, and her physics teacher has it in for her. When she's betrayed by the two people she trusts most, Josie thinks things can't get worse.

Until she starts having dreams about a girl named Jo. Every night at the same time—3:59 a.m.

Jo's life is everything Josie wants: she's popular, her parents are happily married, and Nick adores her. It all seems real, but they're just dreams, right? Josie thinks so, until she wakes one night to a shadowy image of herself in the bedroom mirror – Jo.

Josie and Jo realize that they are doppelgängers living in parallel universes that overlap every twelve hours at exactly 3:59. Fascinated by Jo's perfect world, Josie jumps at the chance to jump through the portal and switch places for a day.

But Jo’s world is far from perfect. Not only is Nick not Jo's boyfriend, he hates her. Jo's mom is missing, possibly insane. And at night, shadowy creatures feed on human flesh.

By the end of the day, Josie is desperate to return to her own life. But there’s a problem: Jo has sealed the portal, trapping Josie in this dangerous world. Can she figure out a way home before it’s too late?

My Review:
Reading most of the synopsis, it reads like a light sci fi/fantasy. It's much deeper then that once you get to the 2nd last paragraph. And yeah, it was fantastic in that genre, with Josie being a pretty smart science-y girl, and learning more about this world as the book goes on!

I read somewhere that this is the hardest book that Gretchen McNeil wrote, because she had to keep the doppelgänger(s) the same people, but different in the 2 parallel universes. And I can see that, almost, because she did such a fantastic job of writing them, that it seemed effortless!

We only got Josie's POV, but we could almost imagine it-Josie got to live in her world, after all. So we could understand the desperation to get out of the situation, and put a different you in your place. Still a bad thing to do, but it's understandable!

There were a ton of twists and turns, it was pretty awesome! A few I got close to guessing, but was a little off, and then some of them, yeah, totally didn't expect them! And they just fit right in like a puzzle piece that I didn't know we needed, but was a crucial and vital and totally important middle piece!

Loved this book a lot, and I can't wait to read her next book!