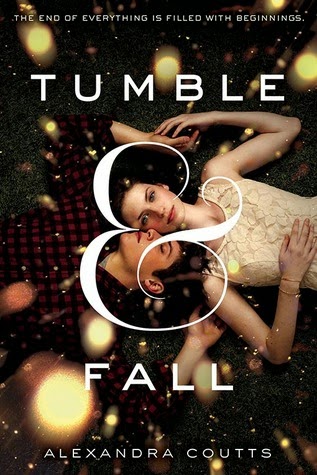 From Goodreads:
A novel about the end of days full of surprising beginnings

The world is living in the shadow of oncoming disaster. An asteroid is set to strike the earth in just one week’s time; catastrophe is unavoidable. The question isn’t how to save the world—the question is, what to do with the time that's left? Against this stark backdrop, three island teens wrestle with intertwining stories of love, friendship and family—all with the ultimate stakes at hand.

My Review:
The initial description of this book, was like a book YA version of that one movie with Kiera Knightly, Seeking a Friend for the End of the World is what I believe it's called, where the world's ending, and the 2 characters go on a road trip to go somewhere (I've only seen the trailer) and this was a bit like that, on outward appearances. But it was more then that.

Sierra, Zan, and Caden, 3 teens on an island, and while their stories don't really connect, their 3 teens who's world is ending before it really began, and things happen, and they're preoccupied with everyone's impending death, and their own issues, and they have expectations pushed on them by adults, and you'd think that people would try and make the last days as happy as can be. Unfortunately, we're only human, and we can't seem to do that!

These were really interesting characters, like Sierra, who before the news of the asteroid hit, was in a mental hospital, but because of it, was pulled out by her dad, so it could be their whole family. Then there's Zan, who's boyfriend died, and she's in mourning, but then she's told something about him that she doesn't like. And then there was Caden, and words can't describe his journey in this book!

While lots of people had complaints about this book, that are valid, that if there'd only been 1 POV character, the story could've been explored more, or how the opening was pretty open ended, yeah, they are not as attractive in the book. But it was still good!

I enjoyed this book, it was good, and entertaining!