Today I'd like to welcome over Karen Simpson, author of Act of Grace (see my review tomorrow!) over for a guest post!


The Grace of Quilting

Much of my adult life I have been more a quilter than a writer. For years I told stories about African American life with fabrics, thread and needles. Even though I loved books, I never thought I could write a novel, didn't think I was really smart enough to do that. But then a story, I knew was my story, caught my imagination and I was compelled to set out on my writer's journey.

Act of Grace is loosely based on an incident that happened several years ago in my hometown during a Klan rally. When what was supposed to be a nonviolent protest became violent a young black woman saved a white man from being beaten by throwing her body on him. She got involved because she believed he had the right to his beliefs even if she and others felt he was wrong. For weeks after the event people argued about whether she was a guardian angel or just crazy. My opinion was that she was a compassionate and brave person, worthy of admiration and respect for living up to her values.

Five years after the incident at the Klan rally, I had a dream about a young girl named Grace who saved the life of a Klansman named Jonathan Gilmore, even though rumor held that years ago a member of his family murdered several African Americans including her father.  What came out of the dream was the idea for my speculative novel, Act of Grace. In it I use African and African American mythology to tell a century old, blood -soaked story of eye-for-an-eye vengeance that left many generations in a small Michigan town blind.  Called by the Ancestors, a young African American woman named, Grace must learn to use her shamanist gifts to bear witness to her town’s violent racial history so that all involved might transcend it.

This story would draw me away from my first love for ten years. However, I would find that writing fiction was a lot like piecing and quilting fabric in that I stitched thousands of words together to create an intricate pattern of theme, plot and characterization. Then, one by one, I layered all the pages to produce what I hoped would be an interesting and powerful work.

Recently I began to quilt again and as I lay down stitches on fabric as numerous a as my words on paper, I now see that the two artistic halves of my personality have merged into a joyous creative whole. 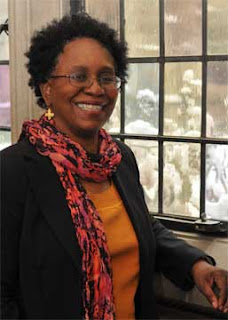 Bio:
Karen Simpson, author of Act of Grace, lives in Ann Arbor, Michigan. She earned a Masters Degree in Historic Preservation at Eastern Michigan University. An avid historian, her speculative fiction is base on African American folklore and history. The 2011 Moonbeam Children's Book Awards recently recognized her novel Act of Grace as the gold medalist in the Young Adult Religion/Spirituality category. The novel also received a nomination for the 2012 Amelia Bloomer Project booklist, an ALA list for books with significant feminist content for young people.