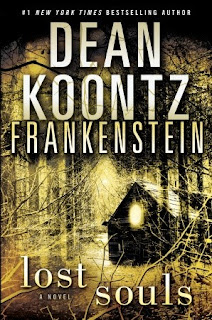 From Goodreads:
The war against humanity has begun. In the dead hours of the night, a stranger enters the home of the mayor of Rainbow Falls, Montana. The stranger is in the vanguard of a wave of intruders who will invade other homes . . . offices . . . every local institution, assuming the identities and the lives of those they have been engineered to replace. Before the sun rises, the town will be under full assault, the opening objective in the new Victor Frankenstein's trajectory of ultimate destruction. Deucalion—Victor's first, haunted creation—saw his maker die in New Orleans two years earlier. Yet an unshakable intuition tells him that Victor lives—and is at work again. Within hours Deucalion will come together with his old allies, detectives Carson O'Connor and Michael Maddison, Victor's engineered wife, Erika Five, and her companion Jocko to confront new peril. Others will gather around them. But this time Victor has a mysterious, powerful new backer, and he and his army are more formidable, their means and intentions infinitely more deadly, than ever before.

My Review:
Oh, how I enjoyed this book so much! I've enjoyed the first 3 books, and yeah, it was nice to read this one, because I thought the 3rd was the end of the series! But it's not, and yeah, it's great that we get to spend more time in this world!

I really enjoyed checking in with Cardon and Michael, with their life together, and yeah, even though it's changed, they are still their sarcastic witty selves, and I just utterly enjoyed reading about them some more!

And yeah,there's Erica Five and Jocko, who are just great, and how they, and Deucalion deal with the fact that Victor is back, and yeah, there were all tons of complications there, because they thought that they'd gotten rid of him. And it sucks that they didn't for the world, but not for our entertainment!

Really enjoyed this book, and this dip back into this world again, it was so good!