Week 7 Review: The Legacy of Eden 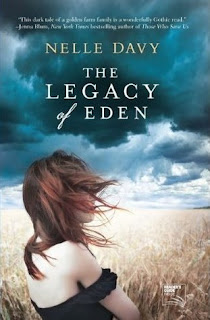 From Goodreads:
"To understand what it meant to be a Hathaway, you'd first have to see Aurelia."

For generations, Aurelia was the crowning glory of more than three thousand acres of Iowa farmland and golden cornfields. The estate was a monument to matriarch Lavinia Hathaway's dream to elevate the family name - no matter what relative or stranger she had to destroy in the process. It was a desperation that wrought the downfall of the Hathaways - and the once prosperous farm.

Now the last inhabitant of the decaying old home has died - alone. None of the surviving members of the Hathaway family want anything to do with the farm, the land, or the memories.

Especially Meredith Pincetti. Now living in New York City, for seventeen years Lavinia's youngest grandchild has tried to forget everything about her family and her past. But with the receipt of a pleading letter, Meredith is again thrust into conflict with the legacy that destroyed her family's once-great name. Back at Aurelia, Meredith must confront the rise and fall of the Hathaway family... and her own part in their mottled history.

"Our farm was like the world when people still thought it was flat. And when you left it, it was as if you had simply sailed too far and fallen off the surface into the void."

My Review:
This was a pretty compelling read! There are still a few mysteries left for me, which I'll detail below, but there was this essence in this book, between Aurelia and what it inspired, and how it all came around!

So yeah, the mysteries: What was up with up with Cal Sr. and the death of his mom? He got mad and said he put the cover on! So I want to know what was up with that. And just how violent did her uncle get with that one lady that refused his proposal? I know it was bad, but just that it happened, I would like some more details there! Oh, and where Julia went after her dad banished her!

I wouldn't want to live in this family, it was poisoned, and yeah, the rot just spread from family member to family member, not really to her dad, that we could see, or to her sister Ava, besides how she was affected by rot in Cal Jr., or really, even Meredith, but in the others, yeah, there was some rotting going on!

This was a really compelling story, really entertaining, and just really different from what I mainly read!