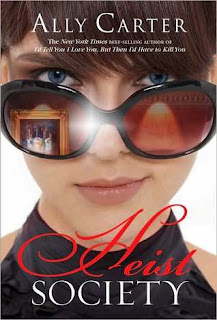 From Goodreads:
When Katarina Bishop was three, her parents took her on a trip to the Louvre…to case it. For her seventh birthday, Katarina and her Uncle Eddie traveled to Austria…to steal the crown jewels. When Kat turned fifteen, she planned a con of her own—scamming her way into the best boarding school in the country, determined to leave the family business behind. Unfortunately, leaving "the life" for a normal life proves harder than she’d expected.

Soon, Kat's friend and former co-conspirator, Hale, appears out of nowhere to bring Kat back into the world she tried so hard to escape. But he has a good reason: a powerful mobster has been robbed of his priceless art collection and wants to retrieve it. Only a master thief could have pulled this job, and Kat's father isn't just on the suspect list, he is the list. Caught between Interpol and a far more deadly enemy, Kat's dad needs her help.

For Kat, there is only one solution: track down the paintings and steal them back. So what if it's a spectacularly impossible job? She's got two weeks, a teenage crew, and hopefully just enough talent to pull off the biggest heist in her family's history--and, with any luck, steal her life back along the way.

My Review:
Oh, this book had it all! Great characters, great plot, and totally fun! And a quick read! Kat was smart, and resourceful, and I loved the one scene where she just walked into the bad guy's house, and it sounded like she did it looking like she didn't have a care in the world! Just really sweet! Can't wait to read Uncommon Criminals, but I have to wait till I get back from Phoenix!

I loved the plot, and the countdown of the 2 weeks that Kat has to get the paintings back. And all the places that she goes to first collect her people, then to collect clues, and finally to prepare for the "spectacularly impossible job" there was some really cool places like various places in Italy, Paris, and London.

All the details that went into the plan for the take back of the paintings, well, they were really intricate, with the faulty furnaces which lead to the smoke bomb, ascertaining what the security was, and all the little details, they were just amazing! And we only were told less then a quarter of what they actually planned, which made it all the fun to read as they pulled it off! Loved it!

I really want to know what Hale's first name is! It can't be just "W," it has to be something, though Kat's guessing was fun to read! Must find out his name, and I've heard that they kiss in the next book, but I want them to get together, because they fit! Yep.

This was an amazing book, can't wait for the week after next to read book 2!!!