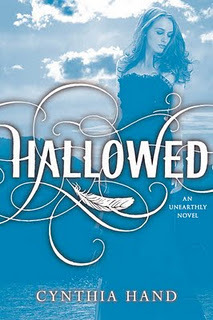 From Goodreads:
For months Clara Gardner trained to face the fire from her visions, but she wasn't prepared for the choice she had to make that day. And in the aftermath, she discovered that nothing about being part angel is as straightforward as she thought.

Now, torn between her love for Tucker and her complicated feelings about the roles she and Christian seem destined to play in a world that is both dangerous and beautiful, Clara struggles with a shocking revelation: Someone she loves will die in a matter of months. With her future uncertain, the only thing Clara knows for sure is that the fire was just the beginning.

My Review:
I really enjoyed reading this book! Such a great sequel, and yeah, lots of things happen, like dealing with the fact that the visions didn't show everything, and that Christian is part angel, too, and was having the same vision as her from his perspective!

I really felt bad for Clara's conflicted emotions between Tucker and Christian, because yeah, she doesn't deserve to have that, because she likes Tucker a lot, and Christian, she likes as a friend, and then there's the visions that connect them, and yeah, it's complicated!

I want to know more about Angela! She seems to have a lot of secrets, and I know we get a novella with her and Clara, and yeah, I hope we learn more about her, because she's part angel, too, so yeah, besides her mom, that's really the only girl that she knows that's like her! So I want both us readers, and Clara to learn more about her!

This was really a fantastic book, thoroughly enjoyed it, and yeah, I can't wait for Boundless, because I know it's going to be just a great, excellent ending to the series!