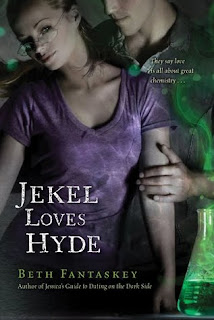 From Goodreads:
Jill Jekel has always obeyed her parents rules; especially the one about never opening the mysterious, old box in her father's office. But when her dad is murdered, and her college savings disappear, she's tempted to peek inside, as the contents might be the key to a lucrative chemistry scholarship.

To improve her odds, Jill enlists the help of gorgeous, brooding Tristen Hyde, who has his own dark secrets locked away. As the team of Jekel and Hyde, they recreate experiments based on the classic novel, hoping not only to win a prize, but to save Tristen's sanity. Maybe his life. But Jill's accidental taste of a formula unleashes her darkest nature and compels her to risk everything, even Tristen's love just for the thrill of being . . . bad.

My Review:
This was such a page turner! I enjoyed how the Dr. Jekel/Mr. Hyde came in, and was twisted in this book, it was just so awesome, and to have it with teens, and teens who may become romantically linked in the book, yeah!

I really enjoyed the twist of that Tristen is a descendent from the original Hyde, and they're trying to get rid of what that means, and how Jill becomes the same, because that makes the problem worse, but it was just delicious to read that! Great twist!

Jekel Loves Hyde was an original, amazing, and unique book, loved it so much, I'm going to have to check out her other books!