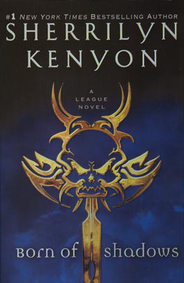 From Goodreads:
For Caillen Dagan, a defiant soldier of fortune, survival isn't a right, it's a brutal daily battle. Moving through the Ichidaian universe like a wraith, his brushes with the law and death are legendary. But when an act of rare heroism reveals his hidden birthright, he's forced into a world much more dangerous and cold-hearted than the bloody streets where he was raised-one of obscene wealth and lethal politics.

Ferocious and determined, Desideria serves as an official bodyguard for her queen. Born of questionable genetics, she will do anything to prove herself worthy of the weapons she carries and the position she's won by combat. But when she uncovers a ruthless plot to assassinate the queen and overthrow her country's government, Desideria is caught in the crosshairs.

With assassination contracts out on both of them, Caillen and Desideria must learn to fight together or die alone. And if they fail, their governments will fall into the hands of an unimaginable evil.

My Review:
Full of humor, heart-break, and incredible characters, this is a trademark Sherrilyn Kenyon book, which is why I love her books! Caillen is scarred, he's taken blows for his sisters, he's lived a hard life, saw his dad murdered right in front of him, and then it turns out that he's a prince, that he was smuggled to this family so that he could live, and he doesn't fit in well with the other politicians. Desideria wants to prove herself to her family, that she's worthy, and after she defeats her aunt in a fight, well, she gets her chance. And then when he overhears a plot to kill her mom, and tries to tell about it, she's laughed off. And then someone tries to kill her, Callien defends her, and then they are on an escape pod. And in outer space.

And they were totally crazy characters, and fun, and that Caillen goes into the burning, about to blow up pod to rescue a backpack, even a very helpful backpack, well, that was quite funny! And how they survive on that planet until they get rescued, and all the action, and the romance that develops, well, it is just a great read!

And when they're told that their respective parents have been killed, well, they just want to hunt down the ones that did it, but they have to avoid the people that want to kill them, well, that involves funny incidents, life-threatening incidents, and lots of action, humour, wit, and greatness.

When the plots and all the twists and turns-ones that could not have been expected, but were so great, are discovered, and the ending where he almost dies, well, that was just, well, I want more book to read! It was just so explosive!

This was another amazing wonderful book of Sherrilyn Kenyon's, and I hope you read it, and if you have, then you know what I mean! I mean, it's so good! Read it!!!