Week 8 Review: The Woman in Black 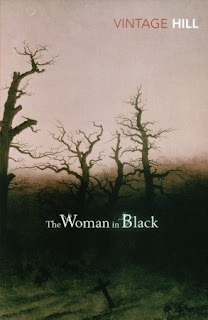 From Goodreads:
Set in Victorian England, Arthur Kipps, a junior solicitor in London, is summoned to Crythin Gifford to attend the funeral of Mrs Alice Drablow, and to sort through her papers before returning to London. It is here that Kipps first sees the woman in black and begins to gain an impression of the mystery surrounding her. From the funeral he travels to Eel Marsh House and sees the woman again, plus he also hears the terrifying sounds of adult and child passengers sinking into the quicksand on a pony and trap.

Despite Kipps's experiences he resolves to spend the night at the house and fulfil hi professional duty. It is this night at Eel Marsh House that contains the greatest horror for Kipps. Rescued by Mr Daily, a friend he met on the train, Kipps discovers the reasons behind the hauntings at Eel Marsh House. The book ends with tragedy, with the woman in black exacting a final, terrible revenge.

My Review:
This book was quite boring, I'm sad to say, and nothing really happened. He was scared, but the sentences were so long and dragging that it felt like it took a whole page for him to describe a small incident of fright.

Which kinda sucks, because I read it because Daniel Radcliffe is going to be staring in the movie adaptation, and I wanted to enjoy the source material. But I guess that's not going to happen! Oh, well!

Though this book was pretty creepy! I mean, what with the title being The Woman in Black, though it is told back and forth between the creepiness, and the guy near the end of his life, which wasn't as interesting. But the creepy parts, they were kinda really terrifying!

All in all, a book I won't read again, but one that I think should be read along with seeing the movie!