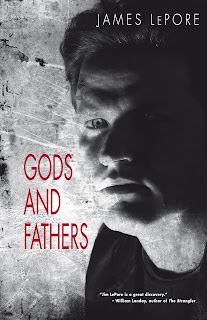 From Goodreads:
Matt DeMarco is an accomplished Manhattan attorney with more than his share of emotional baggage. His marriage ended disastrously, his ex-wife has pulled their son away from him, and her remarriage to a hugely successful Arab businessman has created complications for Matt on multiple levels. However, his life shifts from troubled to imperiled when two cops – men he's known for a long time – come into his home and arrest his son as the prime suspect in the murder of the boy's girlfriend.

Suddenly, the enmity between Matt and his only child is no longer relevant. Matt must do everything he can to clear his son, who he fully believes is innocent. Doing so will require him to quit his job and make enemies of former friends – and it will throw him up against forces he barely knew existed and can only begin to comprehend how to battle.

Gods and Fathers is at once a powerful mystery and a provocative international thriller, all of it presented with LePore's signature fascinating characters placed in dire circumstances where every choice poses new and potentially fatal challenges.
My Review:
Powerful mystery definitely describes this book! It was addictive, with conflicts left and right, betraying, backstabbing, and revenge fulfillment, and political scrambling in the face of various disasters, starting with on 1 side the murder of a daughter of a politician who is anti-Syrian, and various other organizations that make up the bad guys. Another side is a series of bombings. How are these all connected? They were orchestrated by the same man. But more on him later, since he's hardly ever mentioned, let alone become a really developed character like the rest of them.

It all starts for Matt when 2 of his friends come in to arrest his son for murder of his girlfriend. Matt, his ex-wife and the mother of the arrested son, Michael, Debra, and Debra's husband are spiraled into a series of events that no one could have predicted. Framed for the murder by 2 supposed friends who work for the stepfather, recommended by the Butler, it could be said, and then the mystery deepens with various deaths and destruction, and lies and half-truths, and posturing of both good and bad guys.

The tension grows, and the stakes raise, and a case comes back to haunt Matt, which makes sense, seeing as it was the prologue and all. So yeah, that was an really interesting prologue that just got me hooked right away!

Political threats, friendships, and more turmoil later, the novel is coming to a close, just as we've gotten really close to the characters, and care for the ones that have unfortunately passed on, either because of the bad guys, or their own actions, and then there was the final showdown. But the novel's not done yet, there's still a few more punches to land. And land and land they do, though they don't affect some as much as they do others. But it still makes the book so awesome!

I really enjoyed the characters, they had substance, they dealt with real issues like family connections, even in the midst of all this crazy political/death. And the plot was just fantastic, twisting and turning with so many unexpected series of events! Really awesome!

Hope you check this book out, because it is an awesome murder mystery/political novel! Try it out!!! 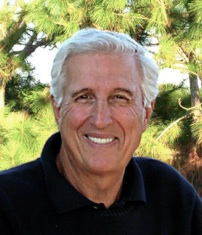 Bio:
In 1999 I sold my law practice to write and take pictures full time. My photography can be seen at www.nakedeyeimages.com. In 2008, I signed a four-book contract with The Story Plant, a small, agile publisher in Stamford, Connecticut. My first novel. 'A World I Never Made,' was released in April of 2009; the second, 'Blood of My Brother,' on December 25, 2010, and the third, 'Sons and Princes,' in April, 2011. Reviews are on my website, or just Google me. I have also written six short stories that stand alone as pieces of short fiction, but that are meant to accompany my first two novels. The first three of these was released in February, 2011, under the title, 'Anyone Can Die.'