I am 26-years-old, and I love YA books. Now here I sit on the cusp of my big debut as a published author (squeal), but it probably never would have happened if I hadn’t found my affinity for YA.

In fact, the first novel I wrote was multicultural literary fiction— it’s never going to be published. I wrote lit fic, because I was trying to prove something to myself, to the world, to somebody. But the book didn’t encapsulate who I am or what makes me a strong writer. So naturally, the story fell flat.

I have no idea what made me decide to write YA the second time around. I even remember trying to avoid it. I spent months trying to convince myself that Farsighted was too ambitious of a project. I was this close to writing a historical fiction novel instead. I’m glad I didn’t listen to my inner worrywart, because writing Farsighted is the best thing I’ve ever done.

When you find that genre that speaks to you and allows you to speak through it, don’t let that go!

Now I’d like to share 10 reasons why I love writing YA. It’s okay if YA isn’t your genre du jour, but don’t force yourself to write something just because the genre is popular or well-respected. Write what your heart wants to write, and the rest will turn out okay.

I write YA because...

1. I wish I had a chance to do my teen years over again. To live them more fully. Writing about teens gives me the chance to do so vicariously.

2. YA is a broad genre. The sky’s the limit. I can write a dystopic novel this year and a romance or mystery next year. YA is not confined by specific plot conventions like other genres. It’s more focused on the characters.

3. YA has a broad readership. The primary audience is, of course, teens. But younger kids also enjoy reading about what the big kids are doing, and adults like reliving their glory days too.

4. The language is fun and approachable. Sure, you could write literary YA, but the candid and easy-to-read style of YA is part of its appeal.

5. First person POV is where it’s at. YA doesn't have to be told in the first person viewpoint, but a lot of it is. Adult literature sticks more to the third person. I love writing in first person. It’s easier for me to develop a character that way, and I enjoy the writing process more.

6. The characters are sympathetic. It’s easier to forgive the misdeeds of someone who’s “just a kid,” making it easier for readers and writers alike to identify with YA characters.

7. The characters can change and grow. They aren’t yet set in their ways. Growth is an expected part of teendom, and it’s wonderful helping your characters achieve that potential.

8. The readers of YA are incredibly devoted. If they like what you’ve written, they will tell the world. Can you think of any books that have a greater cult following than Twilight, Harry Potter, and Hunger Games? Because I can’t.

9. YA readers WANT to enjoy books. They’re not looking to tear a book apart and flesh out all of its flaws. They are willing to overlook weaknesses within a book and focus on what they love about it. Their pleasure in reading is free and much more pure.

10. It’s what I most enjoy reading. Write what you love to read. Don’t force yourself to write a romance if writing sexually suggestive scenes makes you uncomfortable. Don’t write literary fiction as a way to show off your intellect. Write what you want to write. Write was fits your talents and enthusiasm. That’s your best chance at success (no matter how you define the term).


MORE FUN: There's more fun below. Watch the live action Farsighted book trailer and take the quiz to find out which character is most like you! 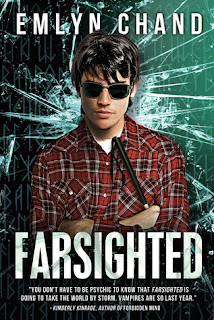 From Goodreads:
Alex Kosmitoras's life has never been easy. The only other student who will talk to him is the school bully, his parents are dead-broke and insanely overprotective, and to complicate matters even more, he's blind. Just when he thinks he'll never have a shot at a normal life, a new girl from India moves into town. Simmi is smart, nice, and actually wants to be friends with Alex. Plus she smells like an Almond Joy bar. Yes, sophomore year might not be so bad after all. Unfortunately, Alex is in store for another new arrival—an unexpected and often embarrassing ability to "see" the future. Try as he may, Alex is unable to ignore his visions, especially when they begin to suggest that Simmi is in danger. With the help of the mysterious psychic next door and new friends who come bearing gifts of their own, Alex must embark on a journey to change his future.

My Review:
What a great book! I really enjoyed it! Alex was an awesome character, despite the fact that he was a teenage boy, but sometimes that was because his emotions were played around with by Simmi. Or enhanced, in any case. He was still a great character, who had to endure some hard times what with being blind, and then the "visions" of the future in the form of hearing voices talk. And how he reacts to those voices, at first thinking they were taking place in the present, then concentrating fully on them. Anyways.

I loved how his powers grew till he wasn't hearing just the future, but being able to remote view, and hear the present. That was really cool!

There was a slight romance in this book, between Alex and Simmi, but it was mostly in Alex's head because she thought of them more as brother and sister. But that just made it better!

The characters were real, they had real problems, and there were weird things going on, like Alex's dad, his behavior was just a bit weird, being nice one minute, and pretty darn violent the next. Yep.

This was a great book, though I'm thinking that the next book is going to break my heart what with Simmi wanting to be with the one who was going to kill her. Yep. Hope you check out the giveaway below!

Giveaway:I'm hosting a giveaway of this book, Farsighted. It'll be a ebook copy, and so it'll be International. I'll pick a winner via random.org on February 29 so you have a week for you guys to enter.

To Enter:
In the comments, tell me something that you think you'd like about this book and your email.

For Bonus Entries, 1 each, (and if you've already done them for a previous giveaway, say that) 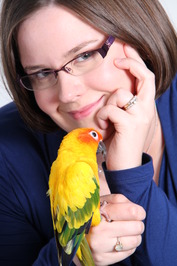 Bio:
From an early age, Emlyn Chand has counted books among her best friends. She loves to hear and tell stories and emerged from the womb with a fountain pen grasped firmly in her left hand (true story). Her affinity for the written word extends to absolutely every area of her life: she has written two-and-a-half novels, leads a classics book group with over three hundred members, and, of course, runs the whole shebang at Novel Publicity.


The book that changed Emlyn’s life is Harold and the Purple Crayon by Crocket Johnson. It opened her eyes to the world that could exist if only she was willing to create it—a lesson she has never forgotten. While she enjoys all types of novels, her greatest loves are literary fiction and YA. Farsighted is her first novel. 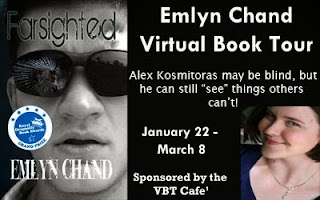 *Disclosure of Material Connection: I am a member of The Virtual Book Tour Cafe' and a copy of this book was provided to me by the author. Although payment may have been received by The Virtual Book Tour Cafe', no payment was received by me in exchange for this review nor was there an obligation to write a positive one. All opinions expressed here are entirely of my own and may not necessarily agree with those of the author, the book's publisher and publicist or the readers of this review. This disclosure is in accordance with the Federal Trade Commission's 16 CFR, Part 255, Guides Concerning the Use of Endorsements and Testimonials in Advertising.*﻿﻿