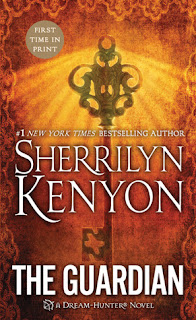 From Goodreads:
Dream-Hunter Lydia has been charged with the most sacred and dangerous of missions: To descend into the Nether Realm and find the missing god of dreams before he betrays the secrets that could kill her and her kind. What she never expects is to be taken prisoner by the Realm's most vicious guardian…

Seth's time is running out. If he can't hand over the entrance to Olympus, his own life and those of his people will be forfeit. No matter the torture, Seth hasn't been able to break the god in his custody. Then there's the beautiful Dream-Hunter Lydia: She isn't just guarding the gates of Olympus—she's holding back one of the world’s darkest powers. If she fails, an ancient curse will haunt the earth once more and no one will be safe. But evil is always seductive...

My Review:
Wow, this was an amazing book! That someone could go through that much suffering, I don't know how he did it, but he endured all that pain, simply because he couldn't die. And that was amazing to read!

While it physically is a small book, about 300 pages, it has a lot packed in, with the Nether Realm, and back story, and the characters dealing with each other, and the side stories, of all the pain that the characters go through, and how they try to work through it, and how their lives get better afterwards. And it was quite excellent to read!

Seth and Lydia were great characters, Seth tortured, but still standing strong, putting on make up to look more fierce as a protection since his looks would have gotten him attacked by the demons in Nether Realm.  And the various horrible things that he's had to live through. He was a strong character. He had his flaws, but it's hard to call them flaws when he built them up for his own protection. And Lydia helped him with the ones he didn't need anymore with her love. Showing that she was an amazing character too!

Oh, and the developments in the series! We got to see a bit more of Noir, and learn a bit more about Nick's dad, Nick of the Chronicles of Nick, spin off of hte DH series. And Lydia's parentage, well, it was pretty funny, because it added conflict between her and Seth, well, funny on her dad's side, and heart-breaking on her mothers. Yep.

This was a spectacular book, so you better check it, and the rest of the series out!!!!