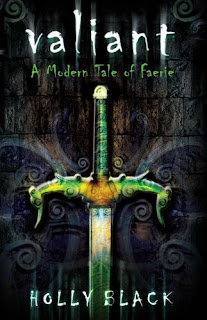 From Goodreads:
When seventeen-year-old Valerie runs away to New York City, she's trying to escape a life that has utterly betrayed her. Sporting a new identity, she takes up with a gang of squatters who live in the city's labyrinthine subway system.

But there's something eerily beguiling about Val's new friends. And when one talks Val into tracking down the lair of a mysterious creature with whom they are all involved, Val finds herself torn between her newfound affection for an honorable monster and her fear of what her new friends are becoming.
My Review:
This book was just so totally entertaining! Set in the same world as Tithe, it does have mostly different characters, and yeah, I really enjoyed getting to know Val, her gang of friends, and Ravus! It was just so entertaining!

This book, most of the conflict, was coming from internal, from what Val is struggling with, because most of this book was a bit of a combative reflective, and yeah, that was pretty epic, because it was different then Tithe, which was more investigate the mystery kind of thing!

I really enjoyed this book, it was just great, and I can't wait to read Ironside!