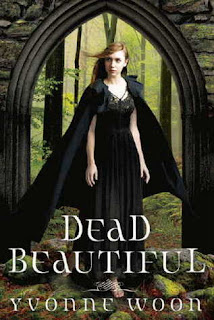 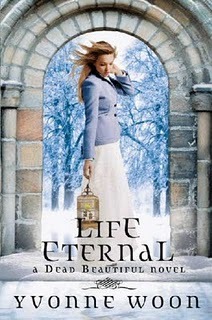 From Goodreads:
On the morning of her sixteenth birthday, Renée Winters was still an ordinary girl. She spent her summers at the beach, had the perfect best friend, and had just started dating the cutest guy at school. No one she'd ever known had died. But all that changes when she finds her parents dead in the Redwood Forest, in what appears to be a strange double murder.

After the funeral Renée's wealthy grandfather sends her to Gottfried Academy, a remote and mysterious boarding school in Maine, where she finds herself studying subjects like Philosophy, Latin, and the "Crude Sciences."

It's there that she meets Dante Berlin, a handsome and elusive boy to whom she feels inexplicably drawn. As they grow closer, unexplainable things begin to happen, but Renée can't stop herself from falling in love. It’s only when she discovers a dark tragedy in Gottfried's past that she begins to wonder if the Academy is everything it seems.

Little does she know, Dante is the one hiding a dangerous secret, one that has him fearing for her life.

From Goodreads:
Renée Winters has changed. When she looks in the mirror, a beautiful girl with an older, sadder face stares back. Her condition has doctors mystified, but Renée can never reveal the truth: she died last May, and was brought back to life by the kiss of her Undead soul mate, Dante Berlin.

Now, her separation from Dante becomes almost unbearable. His second life is close to an end, and each passing day means one less that she will spend with the boy who shares her soul.

Just when Renée has almost given up hope, she learns of the Nine Sisters—brilliant scholars who, according to legend, found a way to cheat death. She can't shake the feeling that they are somehow connected to her dreams, strange visions that hint at a discovery so powerful, and so dangerous, that some will stop at nothing to protect it.

Renée thought she knew the truth about life and death. But there is a secret woven through history that holds the only hope for Dante and Renée. Unless they find answers soon, their time together is doomed to be cut short.

My Review:
Oh, how I enjoyed these books! They were so entertaining, so unique, with great characters, romance, amazing world-building, and yeah, such great mysteries! Loved them so much! So glad that I got Life Eternal from NetGalley!

I loved this world, it was sometimes a bit hard to swallow, that people would act that way, that it was built that way, but it was built so intricately, and yeah, the undead creatures were just so awesome! I utterly enjoyed them, and then we got to go deeper in the world!

We got a lot of new characters in Life Eternal, seeing as Renee is sent to a new school in Montreal. And they were pretty great, lots of secrets, and hidden agendas! That, coupled with the riddle that she has to solve about the Nine Sisters, yeah, just great! The only thing I wanted, was more Dante!

Really enjoyed these books, so much, and I can't wait for Love Reborn!!!