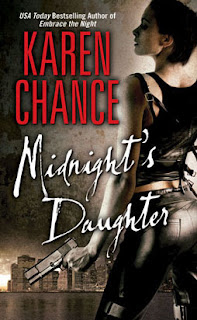 My first review of Midnight's Daughter
My Review:
I wanted to reread this book, seeing as I just recently read the Cassie series, which is set before this series, and part of one of those books leads to the ending of this one-with dropping her dad off. And the book before that started the whole plot of this book, with the stuff about her uncle!

Just going on this journey again, was just so good! From their first meeting, to the complicated relationship that she has with her family, from her dad, her uncle Radu which has to be the best right now, and lastly, her uncle Dracula, Dory just seems to have a hard time with personal relationships!

The ending was just as explosive! And that is meant both literally, and figuratively, since so much happens, and running around and fighting, and revelations! Such a great ending, because while these book mysteries are self-contained, the relationships between the characters aren't!

I loved rereading this book, and I'm going to have to do the same for the next 2 books, I want to be in this world some more!