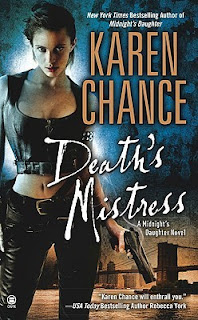 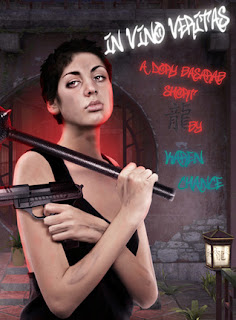 From Goodreads:
Dorina Basarab is a dhampir—half-human, half-vampire. Subject to uncontrollable rages, most dhampirs live very short, very violent lives. So far, Dory has managed to maintain her sanity by unleashing her anger on those demons and vampires who deserve killing.

Back home in Brooklyn after the demise of her insane uncle Dracula, Dory's hoping her life is about to calm down. But then she gets some visitors. A friend wants Dory's help in finding a magical Fey relic, and the gorgeous vampire, Louis-Cesare, is desperate to find his former mistress Christine.

From Goodreads:
"In Vino Veritas" was Karen Chance's contribution to the Chicks Kick Butt anthology (June 2011). It is now available on her website as a free short as per the contract with the publisher.

My first review of Death's Mistress
My Review:
Loved reading these books! So much fun, and we got more of these characters that are so enjoyable to read about! Like Stinky, the ever loveable stinky brownie mix fey who's just so cute, and gets drunk! So cute!

Dory and Louis-Cesare never seen to catch a break! Well, it is early in their relationship, but then there was Christine, and yeah, that was a pretty big complication, because of the whole vampire thing and the past and the present!

There was also the search for the rune, which I remembered was on her, but I had forgotten how it got there, and the story there! But it did help in the end so that she didn't die from the walls all collapsing and stuff!

I knew that Christine was the murder, that she was a reverent, but the little details and the history, that kind of stuff, I'd forgotten. But then In Vino Veritas happened, and I think Dory won the drinking competition for who was the master of Ray. And Dory told Louis-Cesare she loved it-in vino veritas, in wine, truth!

Loved reading these books, and I just need to read more! They're so freaking good!