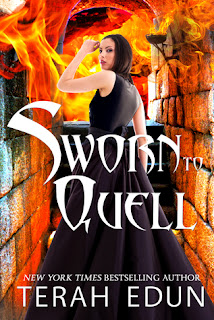 From Goodreads:
Ciardis Weathervane witnessed the collapse of her empire's system of governance. Because everything pivoted on the rule of one man. Now she must forge a new path. Through the madness. Through the chaos.

Still with the imperial palace in ruins, and the coalition between the nobles and the rebellion falling apart, there is no more time. No time to rule. No time to justify.

The god was here for retribution, and her triad would be forced to rise to the occasion or fall under its own bluster.

With an emperor dead, a prince heir uncrowned, and a people lost in the wilderness of death and destruction every which way they turn, Ciardis faces her most challenging assignment yet. Picking up the pieces. Mending the coalition. Winning the hearts and minds of Sebastian's people. The people she could now call her own.

The heavens have come to earth. It remains to be seen if the earth will fall before its might.

My Review:
Reading this book was absolutely amazing! I mean, this whole series is the best, but after that ending of Sworn to War, well, I desperately wanted more! And while there was a bit of a wait, it was well worth it, because this is the longest book in the series thus far. Yeah!

There was a lot to do in this book-plan for the god, deal with Thanos killing the emperor, and a few other things along the way. Of course, things started off with a pretty big boom in the form of Amani, and while we don't get to know her very well, she's very, very important!

The plan that they come up with to defeat her, because of course, Amani is the god-well, goddess, that they've been preparing for, is pretty ingenious, and delves into the history of the nation, going back to the Initiate Wars and the actions of the Empress of the time. We have one book set around that time, and soon to be more, yeah!

A lot goes on in not a lot of time. There's the battle, the planning, and then there's Raisa. That was an unexpected appearance that she made, and she made things more complicated, and more simple, in different areas. Some good, some "oh, crap, another thing we have to deal with."

But there's plenty left to do. Like the actual battle of the Goddess and her forces. There's crowing Sebastian. There's breaking Thanar out of the bond, possibly. There's building up shields they didn't know they had and didn't know they were breaking. There's finding Seven and getting the collar back. Yeah. A lot to do!

Some of my random thoughts are, we should have a list of her friends, and which ones have died, and when, because man, my memory is totally bad! There's that thought that Ciardis had, that something was wrong with the thought of why the nobles need Sebastian to rule, because somebody is going to use that against them. I wonder who's on the covers of each book, and that Sworn to War is still my most favourite cover of the series thus far.

Yeah, I just loved reading this book so, so, so much, and I can't wait for Sworn to Restoration!