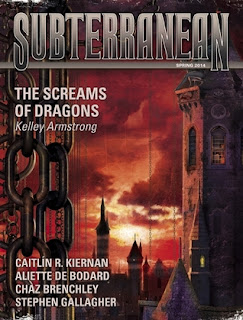 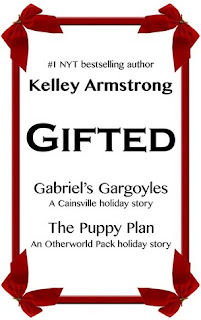 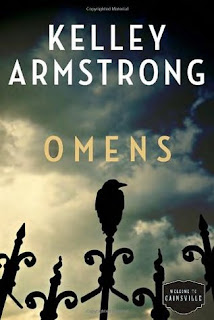 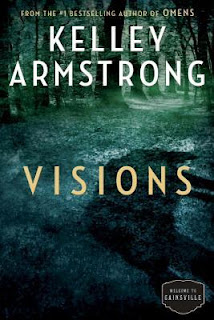 The Days of the War, as Red as Blood, as Dark as Bile - Aliette de Bodard

From Goodreads:
Contains two holiday stories, one Otherworld Pack and one Cainsville.

Gabriel's Gargoyles - (Cainsville short story, Gabriel Walsh as 10 year old narrator.) Cainsville was where a boy could walk the streets safely at any time, day or night. Where everyone was genuinely glad to see you, and didn't think you were odd if you wanted to keep to yourself. Because Cainsville was odd, too. For one thing, there are the gargoyles. Unlike the others, Gabriel doesn't believe the carven creatures came to life to protect the town. It's up to a boy to protect himself. Now he's determined to find the last hidden gargoyle by winter Solstice. He's also determined to get the perfect gift for his great-aunt Rose. And when Gabriel Walsh sets goals, he achieves them…one way or another.

The Puppy Plan (Otherworld novella, 9 year old Logan Danvers as narrator.) When Logan finds an puppy abandoned by the roadside a few days before Christmas, he knows it's a sign. His sister Kate wants a dog more than anything. Their parents aren't completely opposed to the idea. It's just a bad time. A really bad time. Maybe next year. But now there's this puppy in need of a home and a girl in need of a pet… So how does a boy who always plays by the rules give his sister what she wants most?

From Goodreads:
Twenty-four-year-old Olivia Taylor Jones has the perfect life. The only daughter of a wealthy, prominent Chicago family, she has an Ivy League education, pursues volunteerism and philanthropy, and is engaged to a handsome young tech firm CEO with political ambitions.

But Olivia’s world is shattered when she learns that she’s adopted. Her real parents? Todd and Pamela Larsen, notorious serial killers serving a life sentence. When the news brings a maelstrom of unwanted publicity to her adopted family and fiancé, Olivia decides to find out the truth about the Larsens.

Olivia ends up in the small town of Cainsville, Illinois, an old and cloistered community that takes a particular interest in both Olivia and her efforts to uncover her birth parents’ past.

Aided by her mother’s former lawyer, Gabriel Walsh, Olivia focuses on the Larsens’ last crime, the one her birth mother swears will prove their innocence. But as she and Gabriel start investigating the case, Olivia finds herself drawing on abilities that have remained hidden since her childhood, gifts that make her both a valuable addition to Cainsville and deeply vulnerable to unknown enemies. Because there are darker secrets behind her new home, and powers lurking in the shadows that have their own plans for her.

Omens, the first installment in Kelley Armstrong's exciting new series, introduced Olivia Taylor-Jones, daughter of notorious serial killers, and Gabriel Walsh, the self-serving, morally ambiguous lawyer who became her unlikely ally. Together, they chased down a devious killer and partially cleared her parents of their horrifying crimes.

Their success, however, is short-lived. While Olivia takes refuge in the old, secluded town of Cainsville, Gabriel's past mistakes have come to light, creating a rift between the pair just when she needs his help the most.

Olivia finds a dead woman in her car, dressed to look like her, but the body vanishes before anyone else sees it. Olivia's convinced it's another omen, a sign of impending danger. But then she learns that a troubled young woman went missing just days ago—the same woman Olivia found dead in her car. Someone has gone to great lengths to kill and leave this young woman as a warning. But why? And what role has her new home played in this disturbing murder?

Olivia's effort to uncover the truth places her in the crosshairs of old and powerful forces, forces that have their own agenda, and closely guarded secrets they don't want revealed.

My first review of The Screams of Dragons, Omens, Visions
My Review:
Loved reading almost all of these again, and reading Gifted for the first time! This series is so fantastic, and I've enjoyed it so much, so it was great, just before the final book is about to publish, to go to the beginning, and read it all through! It's just so great!

I have read The Screams of Dragons before, but I read it after Omens, which is when it did the most, because the term about the cat, it pops up in Omens, not Visions. Plus, the boy is mentioned, briefly, though now I don't remember which book now, it mentions the boy and his grandmother and being a changeling. So yeah, reading it in more chronological order is so great!

Knowing the synopsis of Rituals, I was looking for the clues that could point out who this 3rd nasty group could be. And I think I might have picked up on a few, but it could be more something to do with the individual plots. I'm not sure. I guess I'll find out in about a month!

There are a ton of ups and downs in these books! Finding out about her parents, the investigation, Gabriel's betrayals, Ricky, that the omens that she sees are real. Just so much, and there's more to come, and it's just fantastic to read!

The Screams of Dragons: