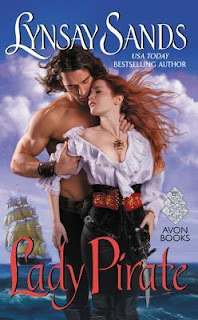 From Goodreads:
Valoree no longer has to masquerade as her murdered brother and scourge the oceans as Captain Red. She no longer has to command his pirate band in a quest to regain his birthright. She has been named heir to Ainsley Castle. But no executor would ever hand over the estate to an unmarried pirate wench and her infamous crew—no matter to whom she'd been born. And the will distinctly states that in order to inherit, Valoree must be married to a nobleman...and pregnant.

Upon learning that, the virgin captain is ready to return to the seas—but her crew has other ideas—and for those rascally cusses she would do anything. If they could find a way to put on her a sweet face that would fool the ton, she would handle the rest, even with a drunken prostitute as an "aunt" and her merry cutthroat crew as "servants." But to herself she swears one thing: she will only marry a man who fires her blood, a man who is not afraid of a...Lady Pirate.

My Review:
Oh, man, this book was so much fun! I think all Lynsay Sands books are fun,. and this was no exception! I loved the idea of Valoree, who had been immersed in the life of a pirate, and pretending to be a guy. And now that she and the crew want to settle down, well, entering the world of the nobles is not something she really wants to do! It's one hilarious thing after another!

Both Valoree and Daniel have to marry to get their inheritances. And it's funny, that it being a condition for one, was the inspiration for the other. But that they would work together and fulfill both at the same time, that just works out fine!

The various supporting cast, the rest of her crew, her "aunt," they were all really great to read about! I loved the way that they were a democracy and voted on things. There was a lot of different personalities, and I enjoyed all of them!

Once they were married, Valoree had to deal with the fact that her crew didn't consider her the leader anymore, but Daniel. That caused a bit of tension because he didn't understand, but they worked it out in the end, and I was happy for them!

I enjoyed this book so darned much, and I can't wait to read more by Lynsay Sands!