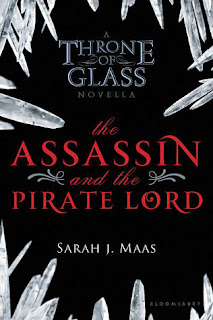 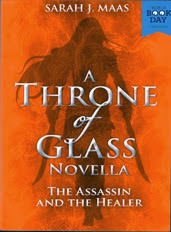 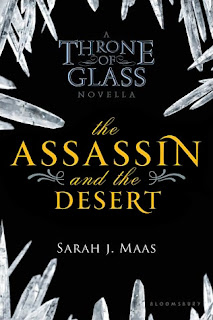 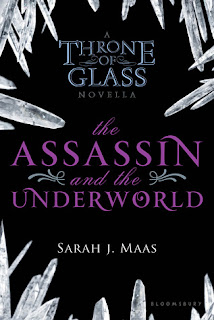 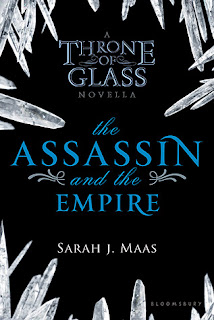 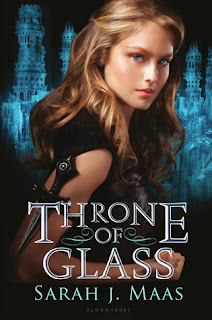 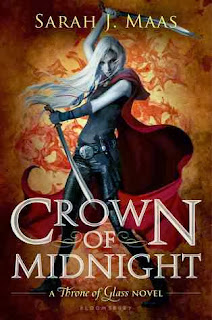 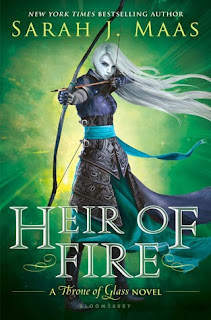 From Goodreads:
On a remote island in a tropical sea, Celaena Sardothien, feared assassin, has come for retribution. She's been sent by the Assassin's Guild to collect on a debt they are owed by the Lord of the Pirates. But when Celaena learns that the agreed payment is not in money, but in slaves, her mission suddenly changes—and she will risk everything to right the wrong she's been sent to bring about.

From Goodreads:
Meet the Assassin: beautiful, defiant, destined for greatness. Celaena Sardothien has challenged her master. Now she must pay the price. Her journey to the Red Desert will be an arduous one, but it may change the fate of her cursed world forever...

From Goodreads:
The Silent Assassins of the Red Desert aren't much for conversation, and Celaena Sardothien wouldn't have it any other way. She's not there to chatter, she’s there to hone her craft as the world's most feared killer for hire. When the quiet is shattered by forces who want to destroy the Silent Assassins, Celaena must find a way to stop them, or she'll be lucky to leave the desert alive.

From Goodreads:
When the King of the Assassins gives Celaena Sardothien a special assignment that will help fight slavery in the kingdom, she jumps at the chance to strike a blow against an evil practice. The misson is a dark and deadly affair which takes Celaena from the rooftops of the city to the bottom of the sewer--and she doesn't like what she finds there.

From Goodreads:
Celaena Sardothien is the assassin with everything: a place to call her own, the love of handsome Sam, and, best of all, freedom. Yet, she won't be truly free until she is far away from her old master, Arobynn Hamel; Celaena must take one last daring assignment that will liberate her forever. But having it all, means you have a lot to lose . . .

Celaena Sardothien is her kingdom's most feared assassin. Though she works for the powerful and ruthless Assassin's Guild, Celaena yields to no one and trusts only her fellow killer-for-hire, Sam.

When Celaena's scheming master, Arobynn Hamel, dispatches her on missions that take her from remote islands to hostile deserts, she finds herself acting independently of his wishes—and questioning her own allegiance. Along the way, she makes friends and enemies alike, and discovers that she feels far more for Sam than just friendship. But by defying Arobynn's orders, Celaena risks unimaginable punishment, and with Sam by her side, he is in danger, too. They will have to risk it all if they hope to escape Arobynn's clutches—and if they fail, they'll lose not just a chance at freedom, but their lives...

A prequel to Throne of Glass, this collection of five novellas offers listeners a deeper look into the history of this cunning assassin and her enthralling—and deadly—world.

From Goodreads:
After serving out a year of hard labor in the salt mines of Endovier for her crimes, 18-year-old assassin Celaena Sardothien is dragged before the Crown Prince. Prince Dorian offers her her freedom on one condition: she must act as his champion in a competition to find a new royal assassin. Her opponents are men-thieves and assassins and warriors from across the empire, each sponsored by a member of the king's council. If she beats her opponents in a series of eliminations, she'll serve the kingdom for three years and then be granted her freedom.

Then one of the other contestants turns up dead... quickly followed by another.

Can Celaena figure out who the killer is before she becomes a victim? As the young assassin investigates, her search leads her to discover a greater destiny than she could possibly have imagined.

From Goodreads:
An assassin's loyalties are always in doubt.
But her heart never wavers.

After a year of hard labor in the Salt Mines of Endovier, eighteen-year-old assassin Celaena Sardothien has won the king's contest to become the new royal assassin. Yet Celaena is far from loyal to the crown – a secret she hides from even her most intimate confidantes.

Keeping up the deadly charade—while pretending to do the king's bidding—will test her in frightening new ways, especially when she's given a task that could jeopardize everything she's come to care for. And there are far more dangerous forces gathering on the horizon -- forces that threaten to destroy her entire world, and will surely force Celaena to make a choice.

Where do the assassin's loyalties lie, and who is she most willing to fight for?

From Goodreads:
Lost and broken, Celaena Sardothien's only thought is to avenge the savage death of her dearest friend: as the King of Adarlan's Assassin, she is bound to serve this tyrant, but he will pay for what he did. Any hope Celaena has of destroying the king lies in answers to be found in Wendlyn. Sacrificing his future, Chaol, the Captain of the King's Guard, has sent Celaena there to protect her, but her darkest demons lay in that same place. If she can overcome them, she will be Adarlan's biggest threat – and his own toughest enemy.

While Celaena learns of her true destiny, and the eyes of Erilea are on Wendlyn, a brutal and beastly force is preparing to take to the skies. Will Celaena find the strength not only to win her own battles, but to fight a war that could pit her loyalties to her own people against those she has grown to love?

These were the books were she was Celaena. She goes though a lot though these books, but they all make her stronger and smarter, which she's going to need. But it also becomes something from which she needs to heal, which Rowan helps with in Heir of Fire. Really enjoyed that!

Having read all the books set after this except the final one which comes out shortly, I was able to see how threads in those books were laced into the stories in these books. And then I could watch them weave together as I kept reading! (Had to keep from mixing metaphors, there!)

These are the books were things aren't really serious. Sure, we learned in Crown of Midnight that Celaena was the heir to the Terrasen throne, but the characters were basically trying to survive, not trying to take down an empire. Yet. Heir of Fire ends with that goal in mind! Yeah!

Loved reading these books so much, they were so great, and I can't wait to read more!

The Assassin and the Pirate Lord:

The Assassin and the Healer:

The Assassin and the Desert:

The Assassin and the Underworld:

The Assassin and the Empire: