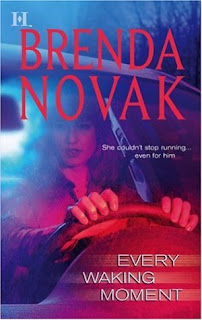 From Goodreads:
Sometimes you have to risk it all.

Emma Wright has finally escaped the dangerous man who's controlled her every move for the past six years. Taking her five-year-old son, she has fled across the country -- seeking freedom, safety, and a fresh start. But Max's father isn't giving up so easily.

Preston Holman understands the lengths a parent will go for his child. He's given up everything to pursue the man he believes killed his son.

When Preston meets Emma, he wants nothing to do with her or the boy who reminds him so much of his own child. Yet he can't abandon them -- and as he's drawn into the danger that surrounds them, Preston begins to wonder if he's finally found something to live for beyond revenge.

My Review:
Reading this book was utterly fantastic! I've really loved reading previous Brenda Novak books, and this one was no exception, so enjoyable to read, and I'm so glad that I found it at the sale, because I want to read all books by my favourite authors!

It really seemed like nothing could go right for Emma. First she has to give up her name, and run. Then she loses the car. And then she loses all but the shirt on her back, and her son's. But thankfully Preston was there, though that added a new issue!

So the way that Preston lost his son, yeah, that was just really horrible. That a doctor would deliberately infect a child with a rare, and life threatening thing, just to save the child, so he could be seen as a hero, is horrible! And the fact that he didn't save all that he did that to, including Preston's son, is just awful!

So there were two kind of bad guys, Miguel, and Vince Wendell, Miguel, because he's chasing Emma and Max. Vince, of what he did to Preson's child. I think that in the end, that was a bit of a redemption for Vince, it could never fully redeem him, but his dying action helped!

This was a really fantastic book, I enjoyed it so much, it was just a fabulous mystery thriller!