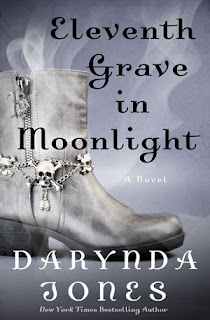 My Review:
Yeah, this book was absolutely amazing! This series has been so freaking great, and I loved having another installment, especially after the ending of The Curse of the Tenth Grave! Of course, things and strange and weird and just wonderful to read!

This book does pick up after The Curse of the Tenth Grave ended, but it doesn't come out and say what Charley did after that ending right away. Nope, things are back to normal and cases and ghosts and dealt with! It's not until later that burning question is answered!

In this book, a lot happens. Like, dealing with the family that kidnapped, and then sold, Reyes. Which is like, about darned time! What they did, was horrible! And then there was the lawyer guy, and more information about Charley's God-ness and history, because things weren't as they seem, and that her memories have been messed with! I want to know more, it needs to be explained! And I'm still having trouble connecting the race of which she was a princess, that decide to become grim reapers with her being a goddess. I know I'm remembering wrong or not enough, but it's aggravating!

There's another evil ending with this book! And it deals with the hell dimension necklace, yeah! Because those innocent souls sent in there just because of an evil pastor guy, yeah, that was great. But oh, that ending was just pure evil! I really hope the next book picks up right after this ending! Because I need to know, I won't be able to handle another beginning like this book's!

Absolutely loved reading this book, and the wait for the 12th book is just going to be horrible and too long!