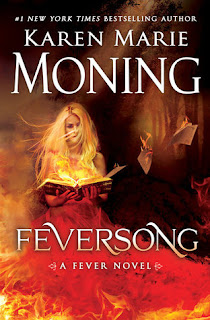 From Goodreads:
#1 New York Times bestselling author Karen Marie Moning returns with the epic conclusion to her pulse-pounding Fever series, where a world thrown into chaos grows more treacherous at every turn. As Mac, Barrons, Ryodan, and Jada struggle to restore control, enemies become allies, right and wrong cease to exist, and the lines between life and death, lust and love, disappear completely.

This time, there's no gain without sacrifice, no pursuit without risk, no victory without irrevocable loss. In the battle for Mac's soul, every decision exacts a tremendous price.

My Review:
Oh, wow, this book was freaking fantastic! This series has been incredible, and so much happened, and yeah, this book was a really fitting ending! Well, to Mac and Barron's story! But we still have 2 more books in the world still, at least, maybe more, depending! Yeah!

First off, there was the evil cliffhanger ending of Feverborn, where Mac used a spell from the book, and the book took her over. Yeah, that was a big deal! And it was a big part of this book, but not all, because the gang is resourceful!

The themes of choice, and being a kingdom or garden, and that it's our fault when we give the keys over to somebody or plant something bad, and don't take it out. And yeah, the Sinsar Dubh was big on shouty capitals and egotistical mutterings and I loved it!

So much was going on in this book. But it boiled down to, the world is going to die, and soon. Finding the Song of Making is on the to do list. And when they find the parts, well, things are a bit more complicated than that, because there is a cost to it all!

These characters have grown throughout this book, and they keep on going! Maybe not the Nine as much as the rest of them, especially since we don't even know the names of all of them, but the ones we know had some moments! Like Ryordan and Dani, and everything there! And the King and the Consort's romance died out, which was sad, but what he did was too big to overcome!

We got the story of Dani when she was a child, from when she and her mom were happy, to her mom locking her up, and more. And it hurt, because while her mom did it for the right reasons, she did the wrong thing. And it sucks.

Dancer was a pretty important part of this book! We learned more about him, which wasn't easy for Dani! And he was a big help in figuring out the holes. So his ending was a bit sad! But then Dani went for Shazam, so there was a bit of balance there!

Fantastic ending, I didn't expect that! But of course, there still are those 2 other books! I wonder if WeCare is going to be a threat, because they don't like Dani! And there's still the Sweeper and the ZEW's, and the King Roach might be a problem, as well! Can't forgot Cruce, though, that's going to be a big thing! Also, we need to know more about the Nine! I need more!

Yeah, this was a fantastic book, and I can't wait to read the next Karen Marie Moning book!