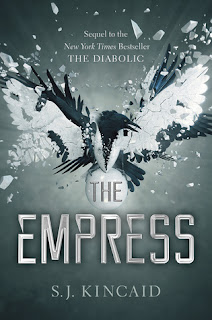 From Goodreads:
The thrilling sequel to S.J. Kincaid's The Diabolic, the New York Times bestseller that TeenVogue.com called "the perfect kind of high-pressure adventure."

It's a new day in the Empire. Tyrus has ascended to the throne with Nemesis by his side and now they can find a new way forward—one where they don't have to hide or scheme or kill. One where creatures like Nemesis will be given worth and recognition, where science and information can be shared with everyone and not just the elite.

But having power isn't the same thing as keeping it, and change isn't always welcome. The ruling class, the Grandiloquy, has held control over planets and systems for centuries—and they are plotting to stop this teenage Emperor and Nemesis, who is considered nothing more than a creature and certainly not worthy of being Empress.

Nemesis will protect Tyrus at any cost. He is the love of her life, and they are partners in this new beginning. But she cannot protect him by being the killing machine she once was. She will have to prove the humanity that she's found inside herself to the whole Empire—or she and Tyrus may lose more than just the throne. But if proving her humanity means that she and Tyrus must do inhuman things, is the fight worth the cost of winning it?

My Review:
Reading this book, it almost felt like it would be the death of me. So much happened, and gah, the feels! Wow, they are doing so well! Oh, no, that's going to have horrible consequences! Oh, what are they going to do now! Oh, how could that happen! There was just so much, and it was so great to read!

This book totally tore my heart out! Wow, the ups and downs!  It was like getting punched-hard-in the throat, being in a big warm hug of love, and then having your stomach drop out of your body. Very, very intense! But so freaking great!

I wasn't sure if I wanted this to be a series. The ending of The Diabolic was good, it could've been a stand alone. But I'm so glad that we got more time with this world, because there's so much to learn! They were daring, and that got them great opportunities-and cost them dearly.

Nemesis had a lot to prove, that she was going to be, well, the Empress. And she faced a lot because she was a Diabolic. But she proved herself, because I knew she wasn't soulless, and I'm glad that it was confirmed by their highest religious figure!

We learned so much about this world-like why they were in the galaxy they were, why they left Earth. And why science was banned. Which was so urgh! It could've gone in a totally different direction, and that was just hard to deal with!

There were so many moments where things were going wrong. They faced so many challenges, some that seemed unbeatable. And that they shouldn't be happening, but they were. Which made the almost ending so great, they won! But then...

Oh, wow, that ending! I kinda read it before I finished the first chapter, so I knew it was coming, but wow, that could not really prepare me! Everything that happened in this book, made the ending so much more poignant and heartbreaking! I need the final book now!

Yeah, I loved reading this book so, so, so much! The wait for the 3rd book is going to be evil!