Week 17 Review: Before We Were Strangers 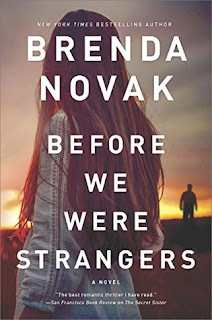 From Goodreads:
Something happened to her mother that night. Something no one wants to talk about. But she's determined to uncover her family's dark secrets, even if they bury her.

Five-year-old Sloane McBride couldn't sleep that night. Her parents were arguing again, their harsh words heating the cool autumn air. And then there was that other sound—the ominous thump before all went quiet.

In the morning, her mother was gone.

The official story was that she left. Her loving, devoted mother! That hadn't sat any better at the time than it did when Sloane moved out at eighteen, anxious to leave her small Texas hometown in search of anywhere else. But not even a fresh start working as a model in New York could keep the nightmares at bay. Or her fears that the domineering father she grew up with wasn't just difficult—he was deadly.

Now another traumatic loss forces Sloane to realize she owes it to her mother to find out the truth, even if it means returning to a small town full of secrets and lies, a jilted ex-boyfriend and a father and brother who'd rather see her silenced. But as Sloane starts digging into the past, the question isn't whether she can uncover what really happened that night…it's what will remain of her family if she does?

My Review:
Wow, this book was so awesome! I always enjoy Brenda Novak books, and this was no exception, I just couldn't stop reading it! It was so good and tightly plotted, so while there's not a lot of action besides discovering clues, it's very fast paced! Loved it!

I felt so bad for Sloane, believing that her dad killed her mom. Even if he didn't, the situation remained that her mom was gone, and her dad wasn't always the nicest person. And then there was Micah, who was really awesome, but that she'd left behind when she left her hometown. And that he'd had a life, which caused some friction with the two of them, and her friend Paige with whom he'd had said life.

Reading this book, I was always on edge that something bad was going to happen. There was this one point with her brother where it got really tense, but it was more her dad that I was worried about. I mean, Sloane has reason to suspect that her dad killed her mom. So I was kept on the seat of my pants, worrying that he might come after her. There were a few scenes where the tension for us readers was particularly high, and they went by so fast!

Sloane's dad, Ed, wasn't the nicest guy. Sure, he was Mayor and was popular, but he kept his dark side hidden, and he could be really cruel. Case in point, that she could even believe he had killed her mom. He also wasn't faithful, and he used his power in a lot of ways that it shouldn't have been used.

There should always be checks and balances on power. The chief of police being buddies with the Mayor, that negates some of the checks. Innocent until proven guilty, yeah, but also nobody should be above suspicion. Because everybody can do bad things under the right-or wrong-circumstances.

How it all ended, with the truth coming out, was pretty vindicating. There were a lot of red herrings, but her mother got justice, and Sloane settled into a pretty happy life. It worked out well, and I was glad for that olive branch that was extended, for forgiveness and closeness. So great!

This book was so fantastic and I really enjoyed reading it!