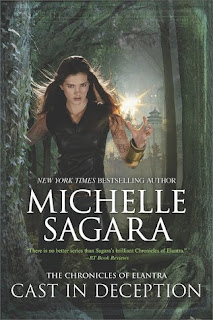 From Goodreads:
WITH FRIENDS LIKE THESE, WHO NEEDS ENEMIES?

Private Kaylin Neya thought her home couldn't possibly get more crowded. But when one of her housemates, Annarion, decides to undertake the Barrani Test of Name, his friends refuse to let him face his task alone--and Kaylin's sentient home, Helen, is the only structure capable of shielding the rest of Elantra from the magnitude of their power.

Annarion and Mandoran almost caused the destruction of the High Halls once already. Add nine of their closest friends, and the danger is astronomically higher--especially since these guests are at the heart of a political firestorm. Imprisoned almost a millennium ago, their recent freedom threatens the rulership of several prominent Barrani families, and the machinations of those Lords make it almost impossible to tell friend from foe.

As political tensions ramp up, the shadows beneath the High Halls are seeking a freedom that has never been possible before. Kaylin must find a way to keep those shadows from escaping, or that freedom will destroy her city, the empire and everything she holds dear.

My first review of Cast in Deception
My Review:
I loved reading this book again! It's almost technically the 3rd time, because when I read Shadow, Flame, Honor and Flight again, I kinda read this book right after, but I skipped over bits, so I don't really count it, but yeah, I had to read it again!

So this book kinda had two parts, at least for me. The first part, where they're in Elantra and all the issues there and are coming to them. And then the 2nd part where they go back to the West March because of the water and end up saving the rest of the friends. Sure, they get there and back much faster than in Peril/Sorrow, but they're going to have some serious ramifications!

I really enjoyed Spike, because yeah, he got a Kaylin-given name, and how he adds another layer to what they know about Shadow. Which is the driving force behind the bad guy, and is something of a bad guy, but is more complicated than that, which this book demonstrates!

That the Consort would try to use her friendship with Kaylin like that, so that she could contain the threat that the cohort poses...yeah, that wasn't cool. And it's going to cause problems on both sides in the future. I can't wait to read it!

This book was so amazing, and I can't wait for Cast in Oblivion!