A Prescription for Delirium: Review 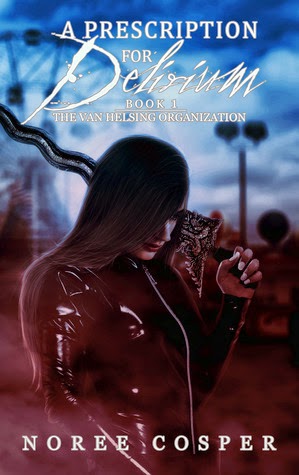 From Goodreads:
Ninety years ago, Gabriella di Luca promised to protect the family of her dying lover. She failed to keep that promise. She was too far away to stop the devil that murdered the eldest Van Helsing son. Years later, Gabby learns the devil has resurfaced. She arrives in Hampton, TX, determined to stop the devil before it can lay a bloody hand on the remaining three brothers.

However, madness is spreading through Hampton. She suspects the devil is using this madness to test a drug which has a side effect of demonic possession. Gabby rushes to end the source of the madness only to fall victim to it. For a woman cursed with eternal life, dying is no threat. However, Gabby must stop the devil's plot or risk losing her most precious possession: her mind.

My Review:
This was an awesome book! With Gabby a kick ass female, who's faced some pretty bad things, has some scars, but she's alive, she's come out on top, while others wouldn't be able to, in her shoes, because yeah, she's faced some pretty terrible things in her lifetime.

What's the one thing a immortal can fear? Well, yeah, the mind comes up at top, but also eternal imprisonment, torturing, like the myth of Promethous, but yeah, for Gabby, it's her mind, because she is really quite intelligent.

There was a lot of great action in this book, the action scenes were just perfect, just enough description that things moved, and I didn't forget what the heck was going on while bogged down in thoughts, or other things, so yeah, loved that!

Loved all these characters, like how Gabby started teaching the Van Helsing family, since she's been around for so long, she's seen some things, and yeah, the bits of history for these characters, were just fascinating, and there's still more to come because it's just book 1!

I really can't wait for book 2, this one was just awesome, and yeah, I hope I can find a copy of the short story, The Flower of Hell, because it has more Gabby!

Bio:
Noree Cosper loves writing about magic in the modern world. While growing up in Texas she constantly searched for mystical elements in the mundane. She buried her nose in both fiction and books about Wicca, Religion, and Mythology. Everyday became an adventure as she joined a group of role-players, acting out her fantasies of vampires, demons, and monsters living in the world. She embraced her nerdom wholeheartedly. Noree grew, but never left her love for fantasy and horror. Her dreams pushed her and her hand itched to write the visions she saw. So, with her fingers on the keys, she did what her heart had been telling her to do since childhood. She wrote.