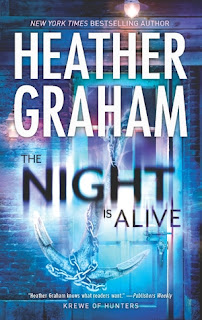 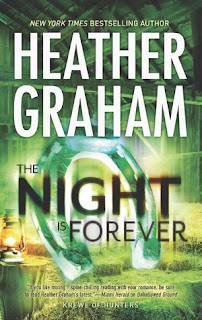 From Goodreads:
Midnight in Savannah

It's a city of beauty, history & haunting's. And one of the most haunted places in Savannah is a tavern called The Dragonslayer, built in the 1750s. The current owner, Gus Anderson, is a descendant of the original innkeeper and his pirate brother, Blue.

Gus summons his granddaughter, Abigail, home from Virginia, where she's studying at the FBI Academy. When she arrives, she's devastated to find him dead. Murdered. But Abby soon learns that Gus isn't the only one to meet a brutal and untimely end; there've been at least two other victims. Then Captain Blue Anderson starts making ghostly appearances, and the FBI's paranormal investigation unit, The Krewe of Hunters, sends in Agent Malachi Gordon.

Abby and Malachi have a similar ability to connect with the dead and a similar stubbornness. Sparks immediately begin to fly: sparks of attraction and discord. But as the death toll rises, they have to trust each other or they, too, might find themselves among the dead haunting old Savannah!

From Goodreads:
A Ghost Rider in the Sky?

What happened here, on a historic ranch outside Nashville, during the Civil War? And what's happening now?

People are dying, starting with the facility's founder, whose body is discovered in a ravine on the property-site of a massacre in 1862. And before every death, Liv sees a horse and rider, wearing a soldier's garb, in the night sky.... Warning? Omen? Or clue?

Liv calls in her cousin Malachi and his Krewe, an FBI unit of paranormal investigators, to discover the truth. New Krewe member Dustin Blake knows they need Liv's involvement in the case, yet he's worried about her safety. Because he and Liv quickly become more than colleagues...and he doesn't want to lose her to the endless night...

My Review:
Yeah, I loved reading these books! They were kinda connected, as Malachi and Liv are cousins! And yeah, of course they're Krewe of Hunters books, and so enjoyable, and these kept that up-they were just so great to read!

I really enjoyed how the ghosts were in these books! Her ancestor was a big help, he did all he could. And the group of ghosts, the murdered friends, and the soldier, yeah, they helped take down the bad guy! Loved it!

These mysteries were really great, because one had police support, and the other didn't at first. And there were all kinds of factors that helped find the bad guys, even when who the bad guys were, hurt. And they did in these books, so much, because it was people they knew, people they had trusted. Not fun!

Oh, and there were also the romances! Can't talk about these books without talking about the romances, because they were part of the characters story arc's! They added so much to these books, and it was sweet and steamy to read them!

Loved these books, they had great endings, and I can't wait to read more of this series!

The Night is Alive:

The Night is Forever: