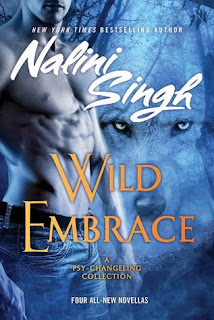 From Goodreads:
The "alpha author of paranormal romance"* presents a stunningly sensual collection of four all-new Psy-Changeling novellas, in which taboos are broken, boundaries are crossed, and instincts prove irresistible...

Echo of Silence
In a deep-sea station, Tazia Nerif has found her life's work as an engineer, keeping things running smoothly. But she wants nothing more than to break down the barrier of silence between her and her telekinetic Psy station commander...

Dorian
A changeling who can never shift lives a life of quiet frustration—until he learns how to let his leopard come out and play...

Partners in Persuasion
Still raw from being burned by a dominant female, wolf changeling Felix will never again risk being a plaything. But for dominant leopard Dezi, he's the most fascinating man she's ever met. She just has to convince this gun-shy wolf that he can trust the dangerous cat who wants to take a slow, sexy bite out of him…

Flirtation of Fate
Seven years ago, Kenji broke Garnet's heart. Now the wolf packmates have to investigate the shocking murder of one of their own. And the more Kenji sees of the woman Garnet has become, the deeper he begins to fall once more. But even his primal instincts are no match for the dark secret he carries...

My Review:
Reading these stories were so fantastic! We got a more in depth look at this series, and that was just so great! Like, Echo of Silence, that's the one couple that was mentioned in Allegiance of Honor that was helping the PysNet, so it was great to have their story!

These are characters that haven't had a lot of screen time in the series, well, besides Dorian, and that was a story over the course of years, and yeah, I was just smiling after he was able to shift! And yeah, it was great to have their stories!

Partners in Persuasion had the first dominate female and submissive male! So that was a really great story to read, because yeah, it helps add so much to this world! I really enjoyed how everything worked out that they could be happy!

Flirtation of Fate, that story hurt. It was the longest, I believe, and yeah, it had a murder mystery, and a romance with a secret! And both those hurt, that the one guy would do what he did. And that Kenji has a very small chance of becoming a biological father. Yeah.

Really fantastic to read this book, and now I can't wait for Silver's story!